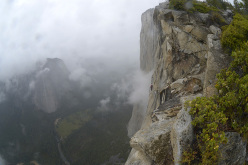 In June Steve Bate from New Zeland repeated the Zodiac up El Capitan in Yosemite. What makes his ascent noteworthy is that Bate is affected by Retinitis Pigmentosa.

A few years ago Steve Bate, a 35-year-old climber from New Zealand currently living in Scotland, was diagnosed with a rare genetic disease that leads to a gradual loss of vision, so much so that Bate currently only has 10% vision left. This loss however has not stopped him from climbing, on the contrary, and in June this year he soloed the historic big wall climb Zodiac up El Capitan in Yosemite.

This beautiful ascent comes about after 12 months of preparation and last June, after having fixed the first two routes and rested, he set off on this long and lonesome undertaking that lasted 6 days and 5 nights on the wall. While Bates had repeated the Zodiac a few days earlier together with Britain's Andy Kirkpatrick, this was the first time he led on a big wall aid climb.

"I was nervous to say the least" stated Bate "more likely terrified at the fact I was going to try and climb this route solo. That fact that I have limited sight (due to Retinitis Pigmentosa) and am registered blind played on my mind. Route finding has always been a problem for me and I really didn’t want to get lost high on the ‘Captain’. As I left the ground the fear melted away in the hot spring sun and I prayed it would get cooler. The climbing totally absorbed all of my concentration and energy."

To find out more about Bate and the ascent check out the following video: www.news.stv.tv