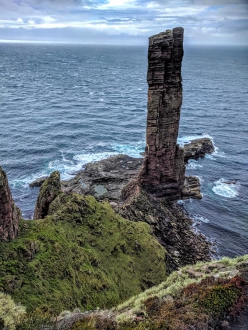 The Old Man of Hoy, Orkney Islands, Scotland. First ascended in 1966 by Chris Bonington, Tom Patey and Rusty Baillie, the 137m high red sandstone tower is one of the tallest stacks in Britain and over time it has come come to symbolise British rock climbing.
Photo by © Alastair Lee / Brit Rock Film Tour 2019 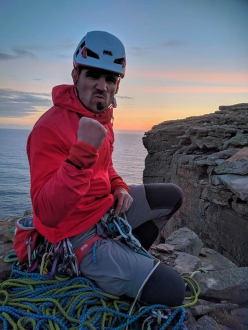 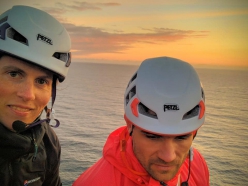 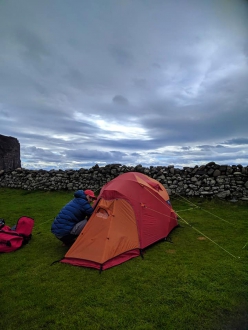 Blind British paraclimber Jesse Dufton, guided by his climbing partner Molly Thompson, has repeated world famous trad climb The Old Man of Hoy off the Orkney Islands in Scotland. First ascended by in 1966 by Chris Bonington, Tom Patey and Rusty Baillie, this 6-pitch outing is a true symbol of British rock climbing.

Just a fortnight ago we report about blind British paraclimber Jesse Dufton and his amazing repeat of the famous trad climb The Sloth at The Roaches in England.

The member of the British paraclimbing team has now taken things to an entirely different level by climbing The Old Man of Hoy just off the Orkney Islands in Scotland. First ascended in 1966 by Chris Bonington, Tom Patey and Rusty Baillie, this 137m red sandstone tower is one of the tallest stacks in Britain and over time it has come to symbolise British rock climbing.

Dufton managed to lead all 6 pitches without taking a fall, guided by his partner Molly Thompson. He stated after the ascent "I led all 6 pitches placing my own gear, feeling my way up… this is the most adventurous hard Trad rock route I've done...it was truly epic!"

He continued "The climb was only half the story, wild camping, an hour walk to the headland, a tricky descent and scramble across to the base, topping out at 10:10pm, then the 3 massive abseils back down...it was dark when we hit the deck, so I had to get back up the cliff totally black blind! I did it with no roped assistance, just followed Molly's instructions, step by step. We got back to the tent at 2:45am. Such an amazing day, unreal!"

More information about this astounding ascent will follow in due course.