David Göttler just below the South Col, while attempting to climb Everest without supplementary oxygen, spring 2019
Photo by David Göttler 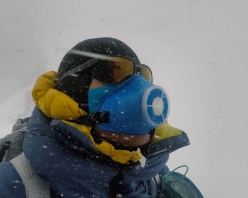 David Göttler at 8650m during his attempt to climb Everest without supplementary oxygen, spring 2019
Photo by David Göttler 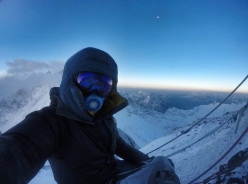 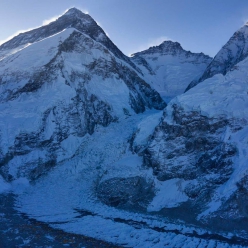 Everest, Lhoste and the Khumbu Icefall, shot by David Göttler prior to his attempt to climb the highest mountain in the world without supplementary oxygen
Photo by David Göttler

David Göttler and his Everest attempt without supplementary oxygen

Interview with German mountaineer David Göttler after his attempt to climb Everest without supplemental oxygen. The 40-year-old climbed the Normal Route on the Nepalese side of the mountain and aborted his attempt at an altitude of 8650 meters, a mere 200 vertical meters below the summit.

For most, the lasting image of the 2019 Everest spring season will undoubtedly be the long queue to the roof of the world, taken on 23 May by former British soldier Nirmal Purja. The startling photo immediately went viral, was picked up by all mainstream media and was accompanied by the sad news that during this short weather window resulting in a record number of ascents for a single day, 10 people lost their lives. These, unfortunately, are the hard facts that will provide plenty of fuel for thought in the future.

Someone whose lasting image isn’t that queue, despite not summiting that day, is German mountaineer David Göttler. Unlike the nigh totality of other climbers operating on the mountain, the 40-year-old was trying to reach the highest point on earth without supplementary oxygen and was therefore, like Cory Richards and Esteban Mena on the Tibetan side of the mountain, very much an exception.

After impeccable preparation, Göttler abandoned his summit bid at an altitude of 8650m, a mere 200 vertical meters shy of the summit due to worsening weather and having to hang about for too long while waiting for people to descend. "Waiting and wasting energy is not an option up there without supplemental oxygen" explained Göttler.

David, first of all: how come Everest? What’s the attaction?

If you are a high altitude mountaineer, then sooner or later you want to reach the highest point on earth. I’d like to know if I’m capable of climbing it on my own accord.

So why this route, the most popular one to the summit? And why alone?
I still had my permit from 2014, so this year I could only try the mountain from the south and up the normal route. If you try it "by fair means" (if this is still possible here!), then the normal route up the South Ridge remains a demanding undertaking. Let's be clear though: this isn’t about alpine style or solo climbing! These are no longer possible on Everest’s normal route.

How did you prepare for this ascent?
I had followed a three-year training program with Uphill Athlete. This mainly trains endurance in the mountains.

What tactics did you adopt?
I decided to start late so that I wouldn't have anyone in front of me as I ascended and also because like that I’d be in the sun quickly. Everything ran really well until the col below the summit. The weather changed, the wind picked up and it even started snowing. Here the climb becomes very narrow and more and more people came towards me, descending from the summit. I had to wait, and I knew immediately that the risk of falling into a trap was too great.

You were 200 m below the summit. Was turning back a difficult decision?
No, the decision to descend was easy. It was clear that the risk was too great. My friend Ueli Steck always told me "don't epic!" and I knew that if I’d continue, I’d run into serious difficulties and I wanted to avoid this

Did anything surprise you?
In truth not much surprised me. I knew there would be many people. And I hoped that there would be a good weather window lasting for more days to allow the people to make their summit bid over a longer period. Unfortunately this year this didn’t happen. So I wasn’t the victim of overcrowding, but of the few days with decent weather conditions.

How were your chances?
I think they were good. But I knew that everything had to be perfect on the day. I have no idea if my chances would have been better had I set off earlier. Or if I had chosen a different day. The number of people was similar on the various summit days, so the problem of so many people would have remained the same. I heard that two mountaineers climbed to the summit without supplemental oxygen but I don't know what tactics they adopted, I didn't see them on the mountain.

In your opinion, is there still room for people like you who want to climb Everest without supplemental oxygen?
Yes, I think it is still possible to climb the mountain in good style. But you have to be lucky with the weather.

What are the best and most beautiful things about Everest?
The worst thing is the ignorance of many climbers here... And one of the best moments is when you talk to the incredibly strong Sherpas and have fun with them. They always find it really exciting that someone is climbing without bottled oxygen and carries all their gear on their own.

And now?
I am very happy with what I managed to achieve and am happy to go home!

02.03.2014
Nanga Parbat in winter: Poles continue. Moro, Göttler and Nardi end expedition
The third attempt by Simone Moro, David Göttler, Tomasz Mackiewicz and Pawel Dunaj to summit Nanga Parbat in winter ended in failure. The Italian German expedition will now return home, as will Italy's Daniele Nardi who attempted to ascend the Diamir face. The Polish expedition remains, in the hope of realising its dream of carrying out the first winter ascent of Nanga Parbat.