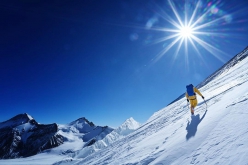 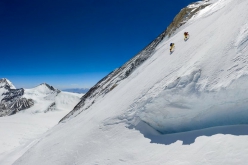 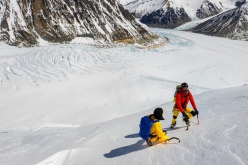 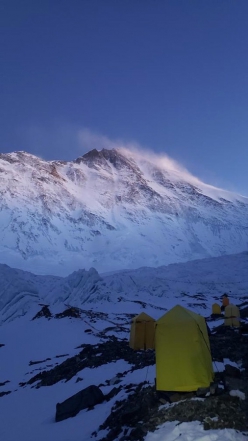 Mountaineers Cory Richards from the USA and Esteban ‘Topo’ Mena from Ecuador are currently trying to forge a new climb up the NE Face of Everest. Kami Rita Sherpa has just climbed the highest mountain in the world for a record-breaking 23rd time.

Spring climbing season in the Himalaya, and in particular on Everest, is in full swing and with the ropes now fixed, the first pre-monsoon summits have been recorded. These include, first and foremost, 49-year old Kami Rita Sherpa who in reaching the top of the highest mountain in the world at 7:50 am on 15 May 2019 has now stood on the summit a record-breaking 23 times.

At present difficult conditions are keeping most commercial expeditions poised for their summit bids, presumably some time later this week, but one expedition that stands out more than all others is the absolutely non-commercial expedition comprised of 37-year-old Cory Richards from the USA and 31-year-old Esteban "Topo" Mena from Ecuador.

Going very much against the status quo, the duo is currently attempting a new line up the NE Face of Everest. The ultra-light two-man team first met on these slopes in 2016 and is now gunning for the obvious couloir next to the 1996 Russian route, to the east of the standard North Col - Northeast Ridge on the Tibetan side of the mountain. The line above the Dong Rongpu Glacier has been attempted in the past, notably by a Japanese expedition in winter, and leads up into the notorious dark rocks called The Pinnacles which they hope to avoid by traversing right and then joining the standard route on the upper NE Ridge.

After reaching base camp in mid-April the two established Advanced Base Camp at 6400m before starting up the route on 29 April. High winds have been an issue, hampering progress and forcing them to acclimatise on the North Face regular route, where as can be seen in the video below they witnessed numerous tents being blown away by the strong gusts of wind. The two have now completed their final acclimatisation rotation and are recovering in Shegar, Tibet, waiting for conditions to improve.

Both Richards and Mena have already climbed Everest without oxygen, in 2016 and in 2013 respectively, and while Richards is best known for his first winter ascent of Gasherbrum II in 2011 with Simone Moro and Denis Urubko, Mena made a name for himself when, aged 19, he became the youngest to climb South Face of Aconcagua. It goes without saying that, should they succeed on Everest, this will be a major success for both of them.

The last route to be added to Everest was completed on 20 May 2009 by a South Korean expedition (Jin Jan-chang, Kang Ki-seok, Shin Dong-min, Park Young-seok) up the mountain’s SW Face. In 2004 the Russians Pasha Shabalin, Ilyas Tuhvatullin and Andrey Mariev completed a Russian direttissima up the Central Pillar of Everest's North Face.

While acclimatizing on the regular route last week, @erichroepke captured one of many tents being swept away by the high winds. Though we had wished for more time to work our route, everything is going as planned. The weather we are experiencing is expected for this time of year. So Topo (@estebantopomena) and I are back at basecamp resting. Keith (@ladzinski) is on his way home to Boulder, CO. He was scheduled to be on the mountain for 1 month and while here, he has captured some of the most beautiful imagery ever of Everest. We will be sharing some of this through the @nikonusa Instagram page soon. In the mean time, since many of you have joined in on the journey while we were just getting to the mountain, I’ll be uploading my Instagram training, nutrition and mental health stories that have lead up to us being on the mountain now. I’ve posted a 2 minute video of the stories from 2018 to my channel. It is admittedly boring, but they become more informative as the time passes. This week I’ll post the January 2019 stories as well as our first “Ask Me Anything”. I hope it will help in building a back story to this climb and what it takes to prepare for something like this. And at the bare minimum, it will keep us all occupied while we wait for the next @gameofthrones episode. #adventure #mentalhealth #mentalhealthawarenessmonth #mentalhealthawareness #climbing #everest #nikoneverest

04.02.2011
Gasherbrum II in winter: after the summit, descent to Base Camp with avalanche for Moro, Urubko and Richards!
Simone Moro, Denis Urubko and Cory Richards have now reached Base Camp after an arduous descent during which they were hit by an avalanche. This historic first winter ascent of Gasherbrum II (8035m, Karakorum, Pakistan) now draws to a close.

01.06.2004
Russians summit Everest by new North Face route
At 09.15am on 30/05/2004 three Russian climbers, Pasha Shabalin, Ilyas Tuhvatullin and Andrey Mariev reached the summit of Mt. Everest via a demanding new line up the Central Pillar of Everest's North Face.