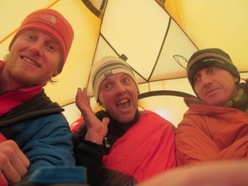 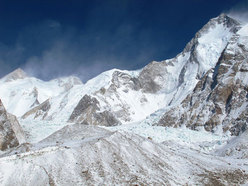 The news has just come in via a telephone call from Simone Moro to his wife Barbara, during which the Italian was understandably extremely pleased and "as light as a feather". At the time of the call the three alpinists were retracing their steps along the traverse beneath the summit pyramid to reach Camp 3 at 6900m which they had left at 3:00am last night. During the brief satellite call Moro stated the the ascent had been "extremely difficult". And, more importantly, that all were well and (obviously) happy.

Their joy is justified: the fast summit has come about 22 days after reaching Base Camp with an extremely lightweight expedition: three alpinists only, and all three reached the summit! It's hard to improve on something like this.

This is Simone Moro's third first winter ascent of an 8000m peak. Three first ascents in winter is an absolute record which the alpinist from Bergamo shares only with the great Polish mountaineer Krzysztof Wielicki (Everest, Kangchenjunga, Lhotse) and the other legendary Polish mountaineer Jerzy Kukuczka (Kanchenjunga, Dhaulagiri and Annapurna, to which must be added the second winter ascent of Cho Oyu). This third success in the terrible cold season comes after Shisha Pangma (climbed in winter 2005 with Piotr Morawski from Poland) and Makalu in 2009, climbed with his habitual partner, Denis Urubko. This highly talented mountaineer from Kazakhstan has already climbed all fourteen 8000ers and thanks to GII he now has two first winter ascents to his name.

For the American mountaineer Cory Richards this is his first 8000er in winter, and only his second ever 8000er: Lhotse was climbed last spring (with supplementary oxygen). The winter ascent is a great result therefore and which, on the eve of the expedition, might have seemed unexpected, also because one couldn't simply assume that he would manage to adapt so perfectly to the pace of two strong men such as Moro and Urubko.

At present Moro, Urubko and Richards are engaged in the most delicate part of their adventure: the descent. Because, as always, everything comes to an end at Base Camp. We'll wait for them there!

GASHERBRUM II IN WINTER: 40 SECONDS ON THE SUMMIT