► News ► Alpinism ► Gasherbrum II in winter: after the summit, descent to Base Camp with avalanche for Moro, Urubko and Richards!
Versione italiana 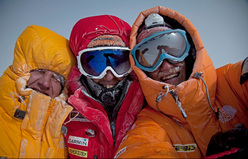 Simone Moro, Cory Richards and Denis Urubko on the summit of Gasherbrum II after the historic first winter ascent.
Photo by Cory Richards 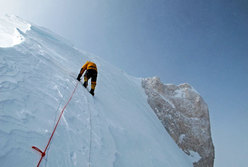 Simone Moro 100m below the summit of Gasherbrum II, and just a step away from the first winter ascent.
Photo by arch. S. Moro

PORTFOLIO / gallery Portfolio: Gasherbrum II in winter: after the summit, descent to Base Camp with avalanche for Moro, Urubko and Richards!

Gasherbrum II in winter: after the summit, descent to Base Camp with avalanche for Moro, Urubko and Richards!

Simone Moro, Denis Urubko and Cory Richards have now reached Base Camp after an arduous descent during which they were hit by an avalanche. This historic first winter ascent of Gasherbrum II (8035m, Karakorum, Pakistan) now draws to a close.

They're safely in Base Camp. Things went well for Simone Moro, Denis Urubko and Cory Richards. Extremely well! Because the descent from their great first winter ascent of Gasherbrum II is one of those which cannot be forgotten. During our brief chat via Skype, Moro is short and to the point, describing today as being "extenuating". We feel it was more than this, seeing that after yesterday's difficult descent from Camp 3 to Camp 1 through the raging storm, today the three had to weave their way through a section which all mountaineers would rather avoid. Firstly because as the meteorologist Karl Gabel had predicted, the weather worsened significantly - read winds gusting at 120km/h and an incessant storm. But also and above all because they endured "a 8 hour battle... with an avalanche..."

Yes, the massive icy labyrinth at the base of Gasherbrum gave it all it had. At a certain point a serac fell, burying and dragging the three alpinists down as they were, obvioulsy, roped together. "It's a miracle we're alive. I came out first I dug with my hands and freed Denis and Cory..." Simone told us. But there is more... "Cory fell twice into two giant crevaces and he's only still with us today thanks to the rope." And the final section would have been more tiring and harder still had the Pakistani expedition cook and his helpers not headed off to meet them and break trail in the extremely deep snow...

Simone, Denis and Cory are now in Base Camp after a splendid, difficult and risky adventure during which they proved their worth as alpinists. They're on fine form. Are not suffering from frostbite. And, after these eternal 6 days on the mountain, are naturally exhausted. They could surely have done without this final twist, but they pulled through nevertheless! This too, as Simone says "is the life" of an alpinist.

It really is all over now: BRAVO!


>> Gasherbrum II in winter: after the summit, Moro, Urubko and Richards reach Camp 1


GASHERBRUM II IN WINTER: 40 SECONDS ON THE SUMMIT