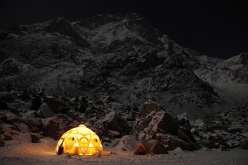 Nanga Parbat Base Camp, at 3600m
Photo by The North Face / Emilio Previtali

The video of the attempt, carried out by Simone Moro and David Göttler, to climb Nanga Parbat (8125m) in winter.

There are just two 8000 metre peaks that remain unclimbed in winter. K2 – to be attempted this season by Denis Urubko, Adam Bielecki and Alex Txikon – and Nanga Parbat, attempted last winter by a series of expeditions including Simone Moro and David Göttler. After 63 days this italian – German expedition was forced to abandon its attempt but as Emilio Previtali, the third member of this expedition wrote and quite rightly reminded us that "alpinism isn't merely about ascending. Alpinism is above all a journey."