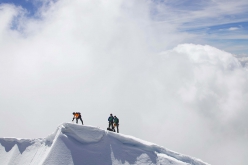 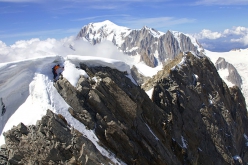 Dani Arnold climbing the Cassin Route up Grandes Jorasses on 27/07/2018 in 2:04, pictured here on the Walker Spur
Photo by archive Dani Arnold / Mammut 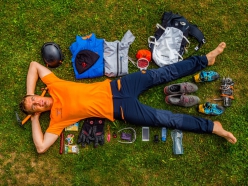 34-year-old Swiss mountaineer Dani Arnold and all the gear he used to climb Via Cassin up Grandes Jorasses on 27/07/2018 in 2:04
Photo by archive Dani Arnold / Mammut

Interview with Swiss alpinist Daniel Arnold who on 27/07/2018 climbed the Cassin route up Grandes Jorasses in the Mont Blanc massif in a record-breaking 2 hours and 4 minutes.

"The Cassin route up the Walker Spur on the North Face of the Grandes Jorasses is a classic alpine outing and represents a dream for all alpinists. The route is highly demanding and due to its length it should only be climbed when the mountain is in excellent condition and you are perfectly fit and acclimatised." This is how mountain guide Enrico Bonino fittingly described the Cassin Route, first ascended from 4 to 6 August 1938 by Riccardo Cassin, Luigi Esposito and Ugo Tizzoni and an all-time manifesto to mountaineering. Climbed solo for the first time thirty years later by Alessandro Gogna on 8 July 1968, it has now been soloed by Swiss alpinist Dani Arnold in an absolutely astounding 2 hours and 4 minutes. Alone, without a rope, without a harness and without even a single carabiner.

Dani, first off, why did you choose this climb?
I just wanted to climb a classic route.

So why not, for example, the classic Colton - Macintyre? Climbed as you know by Ueli Steck in winter 2018 in 2 hours 21 minutes?
I want to go my own way, I don’t want to copy. And for me it’s clear that the three routes on the three great north faces are the ones I have climbed. Even though I knew that the Via Cassin is much harder to climb alone and quickly. I also hand’t thought about being faster than Ueli, I’m just not interesting in that. I simply wanted to climb the Cassin route.

That's why you climbed in summer, not in winter
Yes, the Cassin route is best climbed in the height of summer. And I needed fairly warm temperatures, otherwise I would not have beeb able to climb it without rope.

Without a rope ... you prepared for your rope solo by climbing the line several times
I climbed it three times before. Once with my wife, once with a client, then just before the record with a friend.

What worried you?
There are many awkward sections on the route. Also the upper section, which I then climbed with crampons. The last times up there had always been quite demanding.

What were conditions like on July 27th?
All in all fairly good, but the Rébuffat crack was wet. I had to climb particularly carefully up there. Anyone who’s already done it knows that it’s not that simple.

You also overtook other teams
Yes, nine. Some had set off that day, others had been on the route for several days.

Did you ever immagine you’d be so fast?
No, I reckon somewhere in the region of 3 hours.

Exactly 80 years have passed since the first ascent. An amazing coincidence
Pure chance. It’s a superb route, a great achievement of the first ascentionists. Luckily I did it before the heatwave. It would be too risky now.

How do you rate this climb, compared to your other solo and speed ascents?
It’s certainly a highlight. From the technical point of view the Grandes Jorasses face the most difficult of all, and the time frame when you can climb the route is very narrow.

The next questions is obvious, sorry. Do you think you’ll try and race up the Eiger again?Perhaps try and beat the record set by Ueli Steck?
I don’t think I’ll return the Eiger, no. The motivation is lacking. And I still have many other projects in mind.

Last question Dani. No harness, no rope, no carabiner... how on earth did you come up with this idea? Is it not too light? And in all honesty, would you really have been much slower? How much?
I wanted to climb the route in precisely this style. Mentally it was difficult not to take other gear with me, so climbing like this requires a great deal of self-confidence. For sure, you feel every kilo more or less, but I don’t think that it would have cost me a lot of time. It was more an ethical question. I just wanted to go my own way.

07.01.2009
Ueli Steck speed solo climb on Grandes Jorasses Colton Macintyre
On 28 December 2008 Ueli Steck from Switzerland climbed the classic Colton - Macintyre route up the North Face of the Grandes Jorasses in in a mere 2 hours and 21 minutes, setting a new record for the wall and climbing all three great North Faces of the Alps in staggering times: Eiger, Matterhorn and Grandes Jorasses.