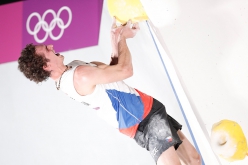 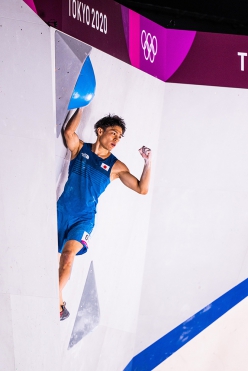 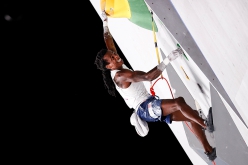 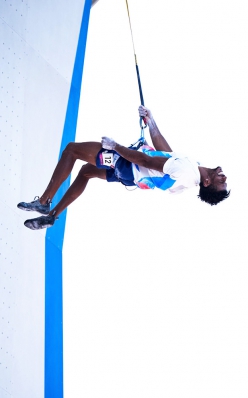 
In the end Adam Ondra, Jakob Schubert and Tomoa Narasaki rose to the occasion and have qualified, along with the new wave of sport climbing. Alexander Megos places 9th and is the first to be exluded. As to Bassa Mawem who injured his bicep on hold 7 of the Lead route, an update on his condition will be given in the morning once he has been assessed by his medical team. Regarding the actual competition, the Combined Olympic Formula proved to be devastatingly intense and truly incredible. Reserved for the only very best.

15:50
It’s time for Tomoa Narasaki and the eight finalists have already been decided. He, fighting on his home turf, is already among these magnificent first Olympic finalists, thanks to his two second places in Speed and Boulder. The Japanese climbs smoothly, but the route is simply too hard and he falls low down. The first Combined Lead route remains without a top.

15:43
It’s time for the penultimate athlete, Jakob Schubert. The Austrian is provisional 9th and must make the miracle happen. He’s s one of the most experienced and talented of all, and Lead is his favourite disciple. The future of his Olympics are now at stake. And he draws on his unfathomable class and experience. He has to reach at least hold 36, does so, and powers on upwards. past Ondra’s highpoint, before falling off the same hold as Duffy. But he climbed faster. First in Lead and, importantly, qualified for the Final.

15:29
Everyone is waiting for Mickael Mawem to make his appearance. The Frenchman leads the provisional ranking having placed third in Speed and first in Boulder. He’s the huge surprise today. And also the most complete athlete, which is precisly what this Combined formula looks for. Provided that he manages to score well in Lead. His huge battle ends at the same height as Piccolaruaz, hold 29. He gave more than he had.

15:25
To get another idea about how hard this route is, all eyes are now on Alex Megos. Whatever happens, it’s clear that America’s Colin Duffy performed outstandingly in  the early moments of this competition. Meanwhile, Megos finds it a tough test. He’s provisional 9th and needs an outstanding results here. But the route takes no prisoners and the Combined is unforgiving.  Megos falls at the very start of the headwall. Yes, Duffy’s was a masterclass in climbing. Only 5 athletes remain.

15:15
Canada's Sean McColl is provisional 18th but he’s definitely a Lead specialist, it’s going to be interesting to see how high he climbs, and how tired he is after the previous rounds. There can be no doubt, this Olympic climbing marathon is devastating and he falls from 35+, far below the top. He places provisional sixth in the Lead. The competition is still in full swing but the speaker has just announced the first to mathematically qualify for Thursday's final: Colin Duffy and Adam Ondra! As always though, this awaits official confirmation.

15:00
He’s followed immediately by Adam Ondra. Here we’ll finally comprehend more about the formula and about who might get on the podium. Ondra climbs like a machine, totally psyched. He climbs upwards, ever upwards. Better and better. The higher he goes, the more he seems to relax. He knows he can't make a mistake. And it climbs fast, faster than ever. Suddenly he’s at the final headwall… and falls. Off hold 39+. Third behind Duffy and Lopez.. This Combined event is intense and full of surprises.

14:50
A cruel twist of fate! Bassa Mawem falls low down, just after having set off, he's injured himself. Perhaps he's torn his left bicep. That would be a terrible shame, also because the Frenchman was provisional 3rd!

14:20
Colin Duffy (USA), who started third, missed the top, falling from just below the last hold. The 17-year-old piled the pressure on right from the outset, especially since he started provisional 4th having laid the groudnwork in Speed and Boulder. The route doesn’t look impossible though, time will tell. It’s a powerful endurance test. As demonstrated by team-mate Nathaniel Coleman, provisional 13th, who battled his was to the last section before dropping off absolutely exhausted. Yes, the best Lead specialists will show how it’s done. What counts though is having recovered well from the previous rounds.

--------------
LEAD 14:10
--------------
In just a few seconds it’s time for Lead, the last discipline of competition after Speed and Boulder. The rule is simple, whoever climbs highest wins. The stakes are higher than ever before, as there are only 8 places up for grabs in order to qualify for sport climbing first-ever Finals on Thursday. These are the provisional top 8 after Speed and Boulder: Mickael Mawem (FRA), Tomoa Narasaki (JPN), Bassa Mawem (FRA), Colin Duffy (USA), Chon Jongwon (KOR), Adam Ondra (CZE), Aleksey Rubtsov (RUS), Rishat Khaibullin (KAZ).

13:15
The last out is Tomoa Narasaki, second in Speed earlier this morning. He fails to top #4 but what he's done a few minutes earlier - 2 tops in 4 attempts - is more than enough to finish second in Boulder. Hot on the heels of astounding Frenchman Mika Maweem, the only athlete with 3 tops and, of utmost importance for the Olympic qualification, third in Speed. Adam Ondra places third with 2 tops and 3 zones. Now there’s the last hurdle to qualify for the Finals on Thusday, Lead in an hour …

13:05
On #3 Schubert only secures a zone, which means that one of the absolute favourites must send #4 to keep his dreams of qualifying alive. So far only Rubstov and Ondra have succeeded. High drama in Tokyo. And the Austrian does so, screaming with rage and with just a few seconds on the clock. From provisional 16th he shoots up to 7th. What a moment.

12:52
Austria’s Jakob Schubert starts badly, no zone on #1, no go on elusive #2. Undoubtedly not the start that one of the strongest athletes of all times had dreamt of. Tomoa Narasaki keeps Japan’s dream alive by sending #1, and also #2. Remarkable. Maweem ends his extraordinary round with a zone on #4.

12:34
Mika Maweem sets the empty stadium on fire by sending #2! He’s the first to do so and, incredibly, he does so flash. He then sends #3 second go, with a tactical heelhook that, incredibly, no one had found beforehand. What a day for the Frenchman who placed third in Speed earlier this morning! Currently he resides in provisional third with three tops. Impeccable.

12:25
France’s Mickael Mawem sends block #1 with ease. What a way to celebrate his 31st birthday today! A few moments later Japan’s Kai Harada matches hands on the same top but fails to hold it for long enough… Adam Ondra easily sends the final problem. Will 2 tops, 3 zones, 7 attempts be enough for qualification? He’s currently provisional first, we find out shortly. But Megos is on fire and he secures a zone on #2. He’s the first to do so and it’s deadly important.

12:15
Spectacular problem #3 is a dream. Or a nightmare. Dripping with sweat Adam Ondra secured the zone but failed to match the hold. He’s currently in 6th and will need to send #4 to keep his Olympic hopes alive. Especially because the likes of Jakob Schubert and Tomaoa Narasaki are still to come. As is Alexander Megos who gets off to a brilliant start: #1 in just 2 attempts.

12:00
Jan Hoyer is one of the best when it comes to pure strength and he demonstrates this by breezing up the last movement of block #3 which had spat off so many other athletes. The German sighs in relief having secured his first top. After a great performance in Speed, Italy’s Michael Piccolruaz starts his bouldering event by sending slab #1 in just 5 attempts. So far it's been a fantastic Olympic debut for the 25-year-old…

11:50
America’s Nathaniel Coleman also sends block #3, while block # 2 remains a mystery. Russia’s Aleksey Rubtsov is the first to send block #4 and ends his round in with 2 tops. Adam Ondra, under pressure after his disappointing 18th place in Speed, starts well on the initial slab and sends it in 4 attempts.

11:35
After a disappointing debut in Speed, China’s Pan Yufei makes a great start and sends block #1 on his second attempt. Block # 2 seems impossible so far, but it’s 17-year-old American Colin Duffy who becomes the first to send block #3 with a creative, powerful circus move. Superb.

11:20
The athletes have 5 minutes at their disposal, but these are not enough for  first athlete Christopher Cosser to reach the top; he secures a zone. The slab seems both complicated and technical, requiring balance and patience. Duffy sends it in 10 attempts, Rubtsov in 6.

10:40
Sport climbings’s first 40 minutes are spectacular and breathless. Full of twists and turns, inconceivable sprints and agonizing falls. The fastest, without a shadow of doubt, is French Speed specialist Basa Maweem followed by Japan's Tomoa Narasaki who after his astounding first round decides not to compete in the second heat against Adam Ondra. Leaving the Czech to compete alone in his least favorite discipline;Ondra climbs too slowly and finishes a disappointing 18th in the speed qualifiers. Like Alexander Megos (19th), he will have a lot to do in Boulder and Lead. Boulder begins at 11:00 CET.

10:20
A spectacular first round, with personal bests obliterated continuously on the 15-meter wall. Basa Maweem sets the fastest time of 5.45, but Tomoa Narasaki is absolutely amazing and stops  the clock after 5.94. Under 6 seconds, and provisional second after the first heat… But there’s no time to think, because the athletes invert the lanes are ready for the second challenge.

10:00 - SPEED
32°C, 75% humidity, but above all a tension that is immeasurable, This is how, at 17:00 in Tokyo, sport climbing begins its Olympic adventure at the Tokyo Olympic Games.

The historic debut starts with the men's qualification, with Speed and, in particular, with the first heat, Christopher Cosser vs Jongwon Chon. And as Cosser sets his personal best, Chon immediately falls. Yes, the tension is palpable.