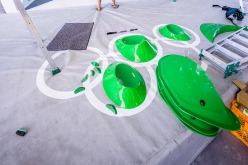 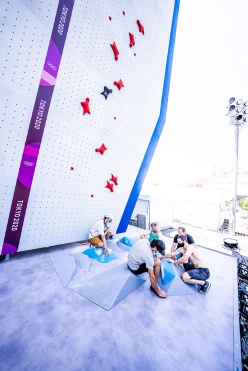 Percy Bishton, IFSC Chief Route-setter for Bouldering at the 2020 Tokyo Olympic Games, in green T-shirt with members of his team
Photo by Daniel Gajda / IFSC

Interview with Percy Bishton, IFSC Chief Routesetter for Bouldering at the Tokyo 2020 Olympics.

On 3 August 2021 sport climbing will finally make its long-awaited Olympic debut at the Tokyo 2020 Olympic Games. 40 athletes – 20 men, and 20 women – will compete until 6 August in a Combined event featuring all three disciplines of the sport: Speed, Boulder and Lead in an attempt to become crowned the first ever Olympic Sport Climbing champion. While Speed is performed on an official route up a 15-meter standardised wall, the Boulder and Lead events take place on problems and routes created specifically for the occasion by professional route setters. Their extremely difficult task is to test the best climbers in the world, fairly and across a range of climbing styles, in an event that showcases the sport to the rest of the world. With less than a week to go before the showcase event, we checked in with IFSC Chief Routesetter for Bouldering Percy Bishton to find out how things are developing.

Percy first off, can you describe how you’re feeling? Is this, like for the athletes, a dream come true for you route setters?
How am I feeling? Excited, a little nervous, probably the same as I feel at any comp, although for this one all the emotions are a bit bigger! A dream come true for a routesetter? Yes, probably, although it doesn’t seem like when you’re in the middle of the work - the physical demands are more than normal because of the heat, and there are many more things that demand your time for an event of this size. I’m incredibly honoured to be given the chance to be part of the setting team for the games, but in some respects working at the Olympics is the toughest setting jobs there is.

Route setters are the unsung heroes of competitions. Introduce us to your team. How many are you and who does what?
The boulder team is Manu Hassler from Switzerland, Romain Cabessut from France and Garrett Gregor from the USA. We all bring different things to the team - different climbing styles and specialities, but everybody brings a huge amount of energy and it's my job to try and coordinate them and work out what we are giving the competitors, and whether it will work.

When and how much time will you have to set the routes and boulders? Is there anything you’re worried about?
We have 4 full days of setting, then some down time while the 3x3 basketball takes place as we share a venue with those guys. Then we get some time for tweaking things a day or two before the start of the event.

The formula is Combined: Speed, then Boulder, then Lead. Does this create special challenges for you guys?
The current combined format that will be used in Tokyo presents some pretty unique challenges. These include factors such as athletes being very specialised in one discipline but maybe not in some others. For example, an athlete who is a regular on the podium for lead climbing may not be at the same level in speed. And likewise, the best speed climbers do not always have a high level for bouldering. Then there is the sheer volume of climbing the athletes have to do in each round of the competition. It’s hard to be able to anticipate the level of fatigue the athletes will have after each event, going into the next, and coupled with factors like heat and humidity it does make things pretty unpredictable.

The style of Bouldering comps has changed considerably in recent years, becoming more dynamic and requiring more coordination. What are your views on this and how hard, or easy, is it to set these modern style problems?
Boulder style has changed a lot, but I don’t think this is a bad progression - it’s just the sport developing and the setters exploring new ideas to challenge the athletes. I think there is place for all styles - new-school and old-school - within our sport, and we would do well to try and include everything in our setting. I don’t like to see too much of one style in a comp - if every boulder relies on coordination or dynamic movement, then it quickly becomes boring, and just a selection of circus tricks. For me, bouldering is more than this, and as setters we should look to test all the different climbing styles, rather than focusing on ones which we think might look best on camera…

Holds have undergone massive transformation in recent years, too. Knowing them can be a big help. Are the ones you’ll be using standard, or are you perhaps using sets designed specifically for the Olympics?
Knowing the holds used in a competition is vital skill for the athletes. The IFSC has worked hard to develop a pool of holds that can be used in international events, and now all the holds, macros and volumes used in these competitions are selected from the IFSC catalogue of approved material. All the holds and volumes used at competitions like the Olympics are just standard holds from the IFSC catalogue, which means that all athletes can have access to, and train on the same volumes, macros, etc.

Do you ever grade your problems? And how hard are they in comps?
No, we don’t grade things. We use easy, medium and hard within the context of a boulder round maybe, but that is as much as we need. How hard is a boulder in a men’s final, for example? I don’t know - hard enough that the best in the world might be able to climb it within 4 minutes, but for most people you would never be able to leave the floor! And do we tweak stuff between rounds? For me, I try and resist the temptation to do this, but sometimes its necessary.

So what would be your perfect comp?
My perfect boulder round would be every boulder being topped, the athletes enjoying the climbs and having to fight for success, boulders that test everything in the climbers skill set, and a crowd that are enjoying the show and going nuts! Let's hope we can pull it off at the Olympics!

Thanks Percy! Best of luck to you and the entire team!