The moment of pain and glory: Aleksei Rubtsov qualifies for Tokyo 2020 as Sascha Lehmann places second
Photo by IFSC 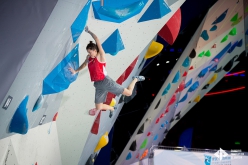 It was the moment of truth. The most important day after an entire week of nail-biting European Climbing Championships in Moscow, with the best eight athletes competing for the remaining two Olympic quota places for Tokyo 2020. Today’s climbing marathon proved gruelling, nerve-racking even, yet in the end the two who fared best in the Combined formula and therefore qualified for Japan next summer were the home favourites Viktoriia Meshkova and Aleksei Rubtsov. Climbing under intense pressure, the two produced the best performances of their lives to join the 16 + 16 athletes who had already qualified in the previous Olympic qualifying events.

Viktoriia Meshkova won having placed 2nd in Speed, 6th in Boulder and then 1st in Lead to total just 12 points. Her top in the Lead in a mere 4 minutes proved just how on form she was today since the only other athlete to reach the last hold, Eliska Adamovska, was a minute slower. The Czech climber had proven unbeatable in the qualifiers yesterday but slipped into third with 64 points while Stasa Gejo battled relentlessly to finish second with 15 points. For a moment it looked as if the Serbian would see her Olympic dreams come true, but then powerful Molly Thompson-Smith and ever-smiling Hannah Meul beat her highpoint. More importantly Meshkova - after having been crowned European Bouldering Champion and European Lead Champion earlier this week - was simply in a league of her own.

The men’s competition went down to the wire like never before, certainly in the history of this new Combined formula. Yesterday’s man of the match Sascha Lehmann climbed outstandingly, finishing 4th in Speed and 3rd in Boulder before racing to the top of the Lead in 2:31. His climb was mind-boggling and placed him in line for overall victory, but then Yuval Shemla came out of the blocks and sprinted to the top, without resting anywhere, making the Lead look like one big boulder problem and ousting Lehmann off the top spot. As reality set in Rubtsov cried tears of joy. Lehmann, understandably, tears of bitter disappointment.

22.11.2020
Ekaterina Barashchuk, Danyil Boldyrev crowned European Speed Champions in Moscow
Ekaterina Barashchuk from Russia and Danyil Boldyrev from the Ukraine were crowned European Speed Champions in Moscow, Russia, yesterday after beating Elizaveta Ivanov and Lev Rudatskiy. The bronze medal was won by Iuliia Kaplina and Marcin Dzienski. Kaplina set a new Speed World Record in the qualification round, stopping the clock at 6,96 seconds.