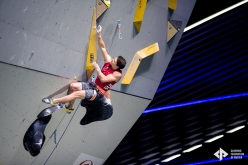 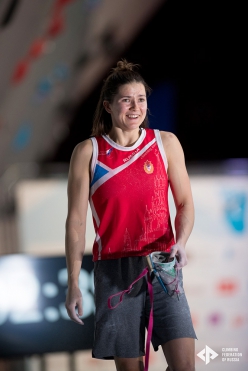 Viktoriia Meshkova wrote climbing history in Moscow earlier today by claiming the European Lead Champion title, incredibly a mere two days after having been crowned European Boulder Champion. Performing under what must have been intense pressure in front of her home crowd, the 20-year-old Russian set out last, knowing full-well that her future lay in her own hands.

Meshkova's competitors had all fared well on the perfectly set route, with first out Hannah Meul impressing for her tenacity through the crux section, and Molly Thompson-Smith leaving all startled by her raw power. The Englishwoman was the first to enter the headwall and her highpoint remained unmatched until Eliska Adamovska from the Czech Republic cruised her way effortlessly past the tiny crimps and on to the last move. The 19-year-old glanced at the clock, composed herself and then made the menacing dyno left to final last hold… she touched it, but swung away uncontrollably.

A few minutes later Meshkova powered her way onto the headwall, too, and leapt to the final hold only touch it - imperceptibly to the naked eye - with her fingertips and take the plunge. For a moment there was high drama in Moscow as it seemed unclear who the winner was, to make matters worse the top two had also been perfectly tied after the Semifinal, but the leaderboard immediately cleared things up: Meshkova won the European double thanks to reaching the penultimate hold in 3:53, compared to the 4:35 needed by Adamovska.

The men’s final proved just as fast and furious as the women’s. Marcus Nimrod from Israel set off first and, climbing without any pressure whatsoever and evidently on a roll, set a highpoint which proved too high for the next four finalists. It was the most decorated man in the finals, Switzerland’s Sascha Lehmann, who finally broke the deadlock; climbing more impressively than ever before, the 22-year-old made it to one move from the top before falling and whooping for joy. His performance, he knew it, had been practically perfect, so much so that the remaining three athletes all fell lower. Dmitrii Fakirianov reached the same hold as Nimrod to take bronze while Nicolas Colin, after risking it all on the spectacular dyno low down, somehow managed to battle his way ever upwards, before finally powering out just a few moves below Lehmann and take silver.

While it is true that the field was depleted of many big names in the competition circuit as various nations including Italy, France, Spain and Austria had decided against sending their athletes to Moscow due to the Coronavirus pandemic, it has to be said that the performances of the athletes, the route setting and the competitions in general lined up by the Russian Climbing Federation have been world-class. After five days of non-stop climbing the athletes will have a well-earned rest day tomorrow, before starting the Combined event and gunning for the last two Olympic tickets.

22.11.2020
Ekaterina Barashchuk, Danyil Boldyrev crowned European Speed Champions in Moscow
Ekaterina Barashchuk from Russia and Danyil Boldyrev from the Ukraine were crowned European Speed Champions in Moscow, Russia, yesterday after beating Elizaveta Ivanov and Lev Rudatskiy. The bronze medal was won by Iuliia Kaplina and Marcin Dzienski. Kaplina set a new Speed World Record in the qualification round, stopping the clock at 6,96 seconds.