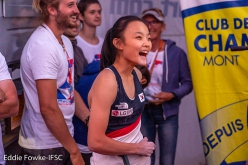 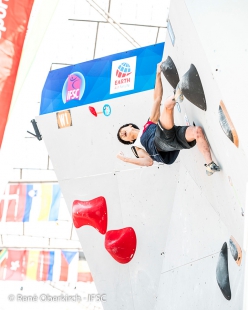 Due to the coronavirus pandemic the XXXII Olympic Games scheduled to take place this summer in Tokyo, Japan, have been postponed. The date is yet to be announced but will take place by summer 2021.
Photo by Tokyo 2020

The International Federation of Sport Climbing (IFSC) has announced the allocation of the remaining two quota places to Jongwon Chon and Chaehyun Seo of South Korea. The lineup of 40 athletes that will be competing in the historic debut of Sport Climbing at the Olympic Games Tokyo 2020 is now complete.

Notwithstanding all uncertainties surrounding the Tokyo Olympics, postponed last March due and scheduled to take place from 23 July to 8 August 2021, and despite all the difficulties associated with the coronavirus pandemic, the International Federation of Sport Climbing has been pressing ahead with its qualification process and yesterday finally announced the allocation of the final two quota places. These now go to 17-year-old Chaehyun Seo and 25-year-old Jongwon Chon, both from South Korea, who qualified on the basis of their results in the 2019 Hachioji Climbing World Championships.

Following the at times tumultuous Sport Climbing Qualification System, the two climbers qualified via their respective placings in the 2019 Combined event where Seo finished 13th in the women’s event and Chon 20th in the men’s event.

Seo successfully emerged as a World Cup medal contender during the 2019 season. At only 15 years old, she made her World Cup debut in Villars (SUI), winning silver in the Lead event. She went on to dominate the rest of the Lead season with four consecutive World Cup victories – in Chamonix (FRA), Briançon (FRA), Xiamen (CHN) and Inzai (JPN) – and the 2019 Lead World Cup trophy. Chon for his part has already won five World Cup gold medals in the Boulder event since 2015, and has participated in a total of 61 world cups and championships in his career.

The allocation of the two quota places completes the Tokyo 2020 Olympic qualification journey that kicked off in Hachioji (JPN), and subsequently included the IFSC Combined Qualifier in Toulouse (FRA), and the 2020 IFSC continental championships in Los Angeles (USA), Moscow (RUS), Cape Town (RSA) and Sydney (AUS).

"Today we have concluded our Qualification process: we know the names of our first Olympians and it is a great moment in our history!” commented IFSC President Marco Scolaris. “The 20 men and 20 women can now focus on Tokyo 2020 and inspire all people involved in the preparation of the Olympic Games, despite the challenges the pandemic has brought."