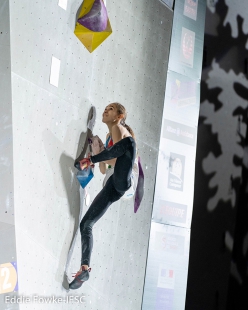 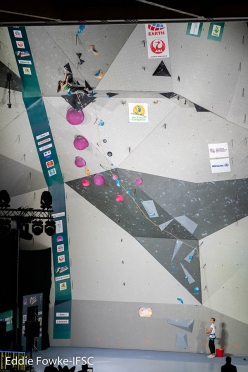 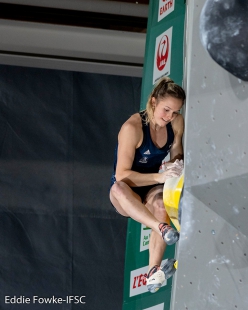 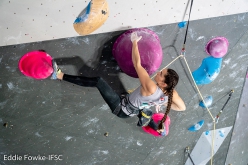 It certainly was, as IFSC commentator Charlie Boscoe stated, a day of high drama in the South of France yesterday where 22 women competed in the second round qualifiers for the Tokyo 2020 Summer Olympic Games. The athletes first battled it out in Speed, followed by Boulder and then Lead for the 6 slots up for grabs for Japan, and Iulia Kaplina produced the run of her life just when it really counted, taking an early lead ahead of YiLing Song and Aries Susanti Rahayu, the only female climber in history so far to have gone under seven seconds who failed to reproduce this world record result. Young Laura Rogora was forced to redo one of her runs on her own due to an issue with the timer, but her lone run up lane B didn’t unsettle the Italian in the slightest.

The focus then shifted to the superbly set Boulder competition. Sandra Lettner set the pace early on but the event was was won by an extremely confident Lucka Rakovec with 4 tops and 4 zones in 7 attempts, ahead of Ai Mori and Mia Krampl who both scored all 4 tops but were separated by the number of attempts needed. Laura Rogora probably surprised the route setters with her top on boulder #1 - she matched low down on the volume instead of the finishing jug - and consequently placed a superb 4th, ahead of bouldering specialist Fanny Gilbert by the smallest of margins. Unfortunately Ievgeniia Kazbekova, one of the strongest contenders for qualification, injured her knee on the first problem; although barely able to walk she battled valiantly through the pain and tears but the injury certainly seriously affected her result. Her 2 tops and 2 zones were nothing short of miraculous but nevertheless she plunged into 11th place in the discipline she usually excels in.

Things came down to the wire in Lead. Ai Mori topped the route and therefore placed provisional first prior to Sunday’s final, while Mia Krampl, Luka Rakovec and Laura Rogora all fell lunging for the last hold. They were consequently separated on time, as were 5th and 6th placed Margo Hayes and Jain Kim who both fell off the same hold, while Julia Chanourdie completed her masterpiece by placing 7th, ahead of Ito Futaba, 8th.

Those who will compete in tomorrow afternoon's final are Ai Mori, Lucka Rakovec, Mia Krampl, Laura Rogora, Ito Futaba, Julia Chanourdie, Iuliia Kaplina and Kyra Condie and according to the rules the top 6 of this Combined event will qualify for Tokyo 2020. As it stands though, due to the somewhat complicated nation quota already being filled by the host country, neither Ai Mori nor Futaba Ito will compete in the Olympics, meaning that the 9th placed YiLing Chong qualifies. The drama on Sunday will continue though because, due to max 2 athletes per nation quota, all eyes will be on Lucka Rakovec and Mia Krampl as they fight to join their teammate Janja Garnbret. It’s going to prove tough.

Note: All qualification places are provisional until confirmed by each athlete’s National Olympic Committee (NOC). Formal invitations will be sent by the IFSC to the relevant NOCs within five days of the conclusion of the Combined Qualifier. The NOCs will then have two weeks to either confirm or decline the quota places.