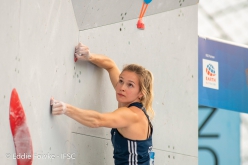 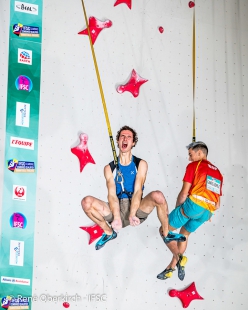 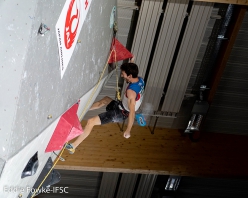 Stefano Ghisolfi: despite this top in the Lead he failed to qualify in Toulouse for the Tokyo 2020 Olympics.
Photo by Eddie Fowke / IFSC 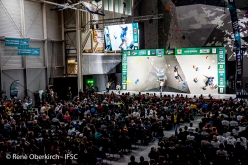 The second, decisive Olympic Qualifying Event for the Tokyo 2020 Summer Olympic Games continues today in Toulouse, France, with the women’s qualification. Live streaming starts at 11:00 with Speed, followed by Boulder at 13:00 and Lead at 16:45. Those who got a pass yesterday are Adam Ondra, YuFei Pan, Alberto Ginés López, Jan Hojer, Bassa Mawem and Nathaniel Coleman

After the at times extremely harsh criticism aimed at the Combined Olympic format which, given the limited number of medals available in Tokyo, includes all three disciplines Speed, Lead and Boulder, it has to be said that yesterday’s Qualifying Event in Toulouse proved exciting and went down to the wire, with those who qualified and those who didn’t often separated by only a hair’s breadth.

Those who qualified for Tokyo 2020 are Adam Ondra, YuFei Pan, Alberto Ginés López, Jan Hojer, Bassa Mawem and Nathaniel Coleman, who will all compete in the pro forma final on Saturday night along with the two Japanese climbers Kokoro Fuji and Meichi Narasaki. Apparently though, despite finishing sixth, Fuji has not qualified for competing on his home turf since Japan has already filled its nation quota.

Those who didn’t qualify include Italy’s Stefano Ghisolfi who, after having placed 21st in Speed ​​and 16th in Boulder (his flash on bloc #3 was awesome), was somewhat "unlucky" with a too easy Lead which was topped out by himself Ondra, Lopez and Lehmann. The fact of the matter is that his total score, achieved by multiplying the results of all three disciplines, was not sufficient to qualify. He would have probably only have qualified by winning the Lead. For him therefore, and for all other European athletes still dreaming of Tokyo 2020, there is now only one last chance: the European Combined Championship that will take place in Moscow in March 2020, where there is one more pass up for grabs.

The Olympic qualifiers continue today with the women’s competition. Just like yesterday 22 athletes will enter the arena at 11:00 for the Speed event, followed by Boulder at 13:00 and Lead at 16:45.