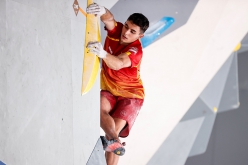 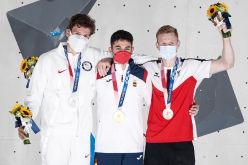 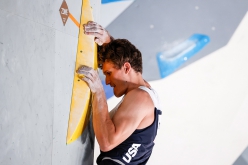 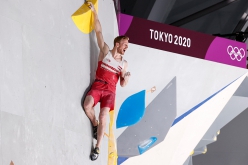 On the biggest stage of all, at just the right moment, Alberto Ginés López from Spain rose to the occasion to win sport climbing’s historic first gold medal. The 18-year-old wasn’t high on the bookmakers list, especially after placing only seventh at the Lead World Cup in Briançon less than a month ago, but he climbed remarkably throughout the sweltering event in Tokyo to take the win, while Nathaniel Coleman from the USA claimed silver and Jakob Schubert from Austria netted bronze.

After Tuesday’s qualifiers, the Speed event kicked off today without the fastest climber in Japan’s capital, Bassa Mawem who had ruptured his bicep in the last round of the qualifiers. This meant that the man who set the Olympic Record scored 8th and, importantly, Adam Ondra whom he was pitted against automatically passed on to the Semis and at least 4th. The athletes could feel the pressure and the usually flawless Colin Duffy immediately made a false start, allowing Ginés López to progress easily on to the next round. The Spaniard then made short work of Ondra, who nevertheless scored a sub 7 seconds personal best, setting him up for the final against Narasaki who had eliminated first Jakob Schubert, then Mickael Mawem. In the battle for first the man who invented a time-saving move low down - the so-called Tomoa skip - slipped right at the start and López ploughed his way to an unexpected victory.

Next up was Boulder, only three problems instead of the usual World Cup four. Everyone except López topped problem #1, all but Ondra flashing it. The Czech sent it second go and with a wry smile, knowing he should have done better. Boulder #2 seemed impossible until Nathaniel Coleman unlocked the sequence with a cunning toe hook and immense body strength. This inspirational top proved key, as boulder #3 - shaped to resemble a rising sun - remained unclimbed. Coleman won the round and then led the provisional standings on 6 points together with Mawem and Narasaki, with López trailing by just 1 point. It was going to go down to the wire.

And indeed down to the wire it went, on the Lead wall, up to the very last hold. Narasaki set an early highpoint fuelling his home country’s dreams of glory, but Coleman soon climbed one hold higher to oust him from the top spot. Ondra knew it was now or never and powered upwards, past everyone else before falling high off the headwall. He knew he’d done well. But how well? Lopez climbed outstandingly before popping off just below Ondra's highpoint, taking provisional first. Gold was going to be decided on how the remaining athletes would fare. Duffy provided a first answer by surpassing López, before unexpectedly falling two holds lower than Ondra. So the climb of the last man out, Jakob Schubert, would be decisive in assigning the first Olympic medals in men's sport climbing. Little did the Austrian climbing machine know that if he climbed higher than everyone else, but lower than Ondra, then the Czech would win the overall title. All the Austrian knew is that after his disappointing 7th in Speed and 5th in Boulder a few minutes earlier, he now wanted to show his true worth, in his favorite discipline, in this sport’s inaugural event, with the world watching. And Schubert was simply unstoppable. He climbed past everyone's highpoint. Even Ondra's. Then he dynoed to the top and yelled in elation. Unbeknown to him, he’d just won sport climbing’s first ever bronze medal. And Nathaniel Coleman claimed silver. And Alberto Ginés López gold.

02.08.2021
Sport Climbing set to make historic Olympics debut at Tokyo 2020 tomorrow
From the 3rd to the 6th of August sport climbing will make its historic debut at the Tokyo 2020 Olympic Games. 40 athletes - 20 men and 20 women - will compete according to the Combined Olympic formula that includes all three disciplines of this sport, Speed, Boulder and Lead, as they quest for climbing’s elusive first-ever gold medal.