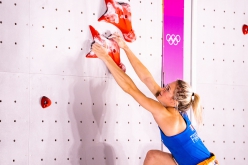 From the 3rd to the 6th of August sport climbing will make its historic debut at the Tokyo 2020 Olympic Games. 40 athletes - 20 men and 20 women - will compete according to the Combined Olympic formula that includes all three disciplines of this sport, Speed , Boulder and Lead, as they quest for climbing’s elusive first-ever gold medal. Here Julia Chanourdie tests the Speed Wall in the runup to the event
Photo by Daniel Gajda / IFSC 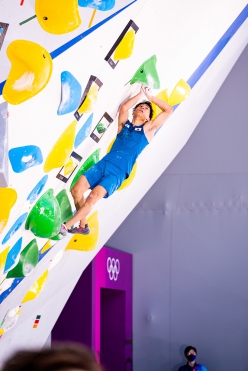 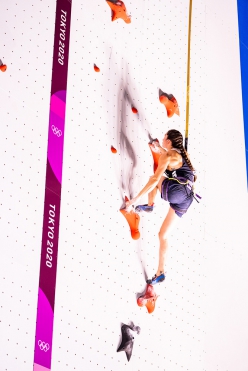 From the 3rd to the 6th of August sport climbing will make its historic debut at the Tokyo 2020 Olympic Games. 40 athletes - 20 men and 20 women - will compete according to the Combined Olympic formula that includes all three disciplines of this sport, Speed, Boulder and Lead, as they quest for climbing’s elusive first-ever gold medal.

After years of dreaming and planning, and after having been postponed a year due to the coronavirus pandemic, sport climbing officially begins its Olympic debut tomorrow at the Tokyo 2020 Olympic Games. Over four intense competition days 40 of the world’s best competition climbers - 20 men and 20 women - will try to permanently engrave their names in the sporting history books.

The debut begins on Tuesday 3 August at 17:00 in Tokyo, or Tuesday morning at 10:00 CET, with the men's qualifiers that will be followed at precisely the same time on Wednesday morning by the women's qualifiers. Only the best 8 of each gender will qualify for the finals, which will take place on Thursday and Friday.

COMBINED OLYMPIC FORMULA
Athletes will compete using the Olympic Combined formula which includes all three disciplines of this sport, Speed, Boulder and Lead. The competition will begin with the Speed ​​event at 10:00 CET, followed by Boulder at 11:00 and Lead at 14:10. Each discipline is of equal importance for the overall Combined score, which is calculated by multiplying the ranking of each discipline; an athlete who finishes tenth in Speed, second in Boulder and second in Lead obtains a final score of 10 x 2 x 2 = 40. The athlete with the lowest score will win the gold medal.

HOW TO WATCH THE COMPETITONS
All stages of the competitions will be broadcast and streamed live across on Eurosport's Discovery+. For a full list of broadcasters covering the Olympic Games in each individual country, click here.

THE ATHLETES
The 20 + 20 athletes earned their spot at the Olympic Games via, due to the pandemic, a somewhat troubled pre-qualification system. The complete list of 40 athletes, seeded by the IFSC, is as follows:

THE ATMOSPHERE IN TOKYO
It’s hot in Tokyo, extremely hot, with temperatures above 30°C and humidity in the region of 50%, making the apparent temperature the athletes perceive far higher. To combat the heat and lower their body temperatures the athletes have been using ice vests during the final stages of their preparations… Although these certainly aren’t ideal conditions for a sport that requires low temperatures and perfect frition, despite this and the thousands of other difficulties, the atmosphere in among climbers in Tokyo is electric. Expectations are high for climbing’s historic Olympic debut tomorrow.