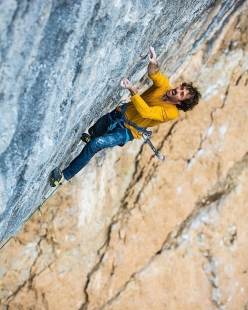 Patxi Usobiaga surpasses himself on Pachamama at Oliana

It was only the other day that we introduced 'El Luchador', i.e. Patxi Usobiaga the fighter who after a long layoff due to injury was attempting to take his climbing to another level by climbing Pachamama, a 9a+/b at Oliana in Spain freed by Chris Sharma in 2009. The 36-year-old has now repeated this 40 meter stamina test, telling planetmountain.com "Words fail me. I’ve dreamt about this moment for 8 years."

With this route the Basque climber has once again demonstrated the grit and determination that netted him three 9a+ in the past: Biographie at Ceuse in France in 2004, La Rambla at Siurana in 2007 and - after his injury and long rehab - Papichulo at Oliana last March. Worth mentioning is obviously his most famous climb of all: the world’s first 8c+ onsight, up Bizi euskaraz at Etxauri in Spain.

Unsurprisingly, Usobiaga has a pristine competition background. His numerous accolades include winning the Lead World Cup in 2006 and 2007, winning the Arco Rock Master in 2008 and the 2009 World Championship.

01.04.2017
Patxi Usobiaga returns to 9a+ climbing form
Basque climber Patxi Usobiaga has repeated Papichulo, a 9a+ sport climb at Oliana in Spain. This heralds a great return to form after injury.