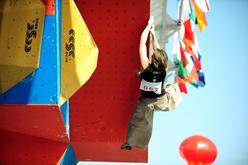 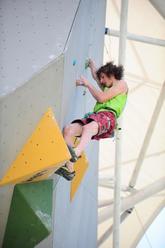 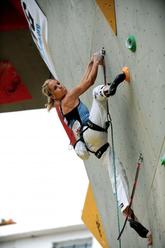 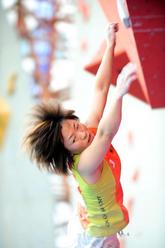 The IFSC Climbing World Championships drew to a close on 05/07/2009 in Qinghai with Patxi Usobiaga Lakunza (ESP) and Johanna Ernst (AUT) winning the Lead. The Russians Alexey Rubtsov and Yulia Abramchuk won the Bouldering event, while Speed was won by the Chinese Qixin Zhong and Cuilian He.

The geography (and age) of climbing is changing as old champions take their bow and new champions take their place. Perhaps this is the overall verdict of the Climbing World Championship which drew to close in China last weekend. Let's not be misunderstood, it's only a light breeze of change, probably only a hint seeing that it came from the distant province of Qinghai. But one cannot help but believe that something really is changing underfoot.

Lead men. To tell the truth Patxi Usobiaga's victory would immediately contradict what was said above. The "lion" of numerous combats won the world title with a battle worthy of an old warrior, for his was the only top on the final. This netted him the gold medal missing from his impressive list of titles and his competition performance was truly world class. Above all because right in his wake a new phenomenon was making waves. A youngster by the name of Adam, surname Ondra. Yes, the current phenomenon who, not content with being the wizard of rock, competed in his first senior Lead competition and was the only athlete capable of topping out in the Semifinal. In the final he then finished just a hair's breadth behind Usobiaga. Not only is the 16 year old vice-champion, he is clearly also the man to beat and the symbol of a new era which he already dominates. It comes as no surprise that third place went to David Lama from Austria, the one who, tied between geniality and inconsistent results, three years ago gave rise to this new generation. Lama placed third thanks to a final flurry, a massive fight. His handicapped battle was fought out against Sachi Amma from Japan (4th) and a group of "new" finalists such as the extremely strong Canadian Sean McColl (5th), Valeriy Kryukov from the Ukraine (6th) and Tatsumi Nitta (8th). Seventh place went to Cédric Lachat, as if to say that the Swissman once again surprised all when they least expected it. Talking about expectations: no one surely thought that defending World Champion Ramón Julian Puigblanque would finish only 16th. Or that one of the main players, Tomás Mrázek, would tumble to 18th. Or worse still, that Jorg Verhoeven, the winner of the 2008 World Cup, would do no better than 25th and that (going against the flow) the 38 year old champion Evgeny Ovchinnikov would finish 11th. Perhaps this is a sign that everything is changing. Amidst all these results, it's worth mentioning 21st place which went to Flavio Crespi, the winner of the 2007 World Cup finally back on form after a long injury, and 9th place of Manuel Romain, the best French athlete which confirms the difficulty that both France and Italy are experiencing in returning to former glory.

Lead women. Talking about "teams", the award winning Austrian squad has no such problems, as nothing stood in the way of incredible Johanna Ernst's triumphal march to her first World Championship title. It has to be said that the competition went down to the wire and that th Austrian star had to battle hard against 20 year old Jain Kim from Korea who, after a great Bouldering World Cup, managed to top out in the Lead final together with Ernst. The title (at a mere 17 years of age!) went to the Austrian thanks to her superior Semifinal result, while Kim had to make do with silver and the "title" of biggest revelation of these championships. Third place went to Maja Vidmar who once again confirmed that she is always at the very top. The other Austrian queen, Angela Eiter, certainly cannot be completely satisfied as she lost the title and placed only 5th, beaten by 21 year old Yuka Kobayashi. Caroline Ciavaldini from France placed 6th while the evergreen Austrian Barbara Bacher finished 7th and the other Japanese Akiyo Noguchi finished 8th. Worth mentioning is the great and probably unexpected 9th place of bouldering champion Olga Bibik, as well as 15th place by Jenny Lavarda who represented Italy on her own once again. "Delusion" must have been felt by the Slovenians Natalija Gros and Mina Markovic, 21st and 18th respectively and veteran Belgian champion Muriel Sarkany who had won silver in Aviles two years ago. This too is a sign that things are changing even if, it has to be said, the World Championship is always a unpredictable competition...

Boulder men. As unpredictable as bouldering itself. The bets on the Bouldering World Championship certainly weren't hedged on 20 year old Alexey Rubstov from Russia: his qualification for the final would have been a scoop in its own right. Silver for teammate Rustam Gelmanov was far more likely as he was one of the prime candidates for victory. What perhaps surprises more though is king Kilian Fischhuber's 5th place: after his 2009 World Cup title the Austrian once again failed to find his way onto the podium. Much to everyone's surprise, the podium's third place went to 27 year old David Barrans from Britain who produced his first important result in a world competition. In short, the men's comp held some surprises. But a brief analysis of the numbers sheds some light as the top three had produced an amazing result, sending all 4 problems and differentiating themselves only on the basis of the number of attempts needed. Rubtsov won gold thanks to a nigh perfect 4 tops in 5 attempts, just one less than Gelmanov who steered clear of Barrans, two attempts further down the line. Guillaume Glairon Mondet from France placed 4th with 3 tops, separated from Fischhuber only due to his fewer attempts, and also Sean Mccoll, who produced an outstanding double comprised of 6th in bouldering and 5th in Lead. 8th place went to the best Italian in the comp, Gabriele Moroni, while Lucas Preti started strongly but then had to make do with 18th overall. What is striking though is the overwhelming power of the Russians who, despite the absence of defending champion Dmitry Sharafutdinov, managed to win not only gold but also silver.

Boulder women. In the women's bouldering event there was the same Russian story, as Yulia Abramchuk won the World title. This too is a surprise, a beautiful surprise: the 26 year old is certainly a competition veteran, possibly also one of the strongest physically and although she often qualified for the final, she rarely made it right to the very top. In China things turned out differently and this victory cannot but be welcomed by all, for she certainly deserved it. In the strange and difficult final the Russian was the only athlete to send 2 problems, while Olga Shalagina, an ex World Champion, won silver with one top and beat defending Austrian champion Anna Stöhr who, in turn beat Mina Markovic on the basis of the zones in the... Semifinal. The biggest surprise of all was 5th place (with no tops) of competition favourite and winner of the World Cup 2009 Akiyo Noguchi from Japan. She beat, thanks to her zones, Anna Galliamova from Russia who had entered the Final provisional first... There can be no doubt that the competition was a bit strange but those who follow these competitions regularly know that bouldering always holds a surprise in store.