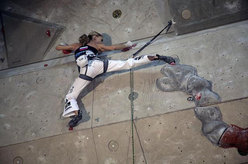 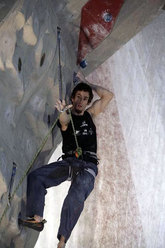 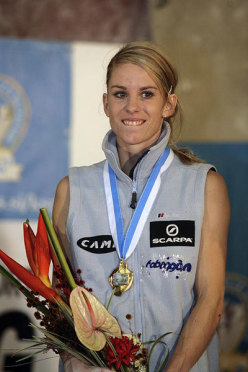 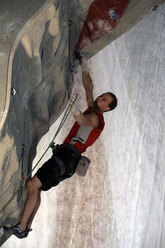 Competing in Kranj, on 18/11 Maja Vidmar from Slovenia and Patxi Usobiaga from Spain won the Lead World Cup 2007. The Slovenian stage was won by Vidmar ahead Irati Anda Villanueva (ESP) and Lucka Franko (SLO), while Swiss Cédric Lachat won the men's event ahead of Flavio Crespi (ITA) and Tomasz Mrazek (CZE).

An unexpected men's competition, with twists and turns, errors and surprises which left all with baited breath, but which in the end assigned the second (by now unhoped for) consecutive World Cup to Patxi Usobiaga from Spain. And a women's comp which underlined the supremacy, almost embarassing, of Maja Vidmar who, climbing in front of her home crowd, won her sixth (!) consecutive stage and her first World Cup (the first for Slovenia for that matter) which could be the start of a longer cycle. This, in brief, is what happened during the eigth and final stage of the World Cup Lead 2007 in Kranj. This proved to be an emotional final, in which nerves got the better of many of the pretenders to the throne.

On the eve of the competition Basque superstar Patxi Usobiaga lead the provisional field ahead of his Catalan teammate Ramon Julian Puigblanque, and a Spanish sprint in the Final seemed more than likely. But to everyone's great surprise this showdown in Kranj never materialised. Or rather, it ground to a premature halt in the difficult and treacherous Semifinal which eliminated both duelists as they failed to stick the enormous reach. This unimaginable coup de théâtre sent Usobiaga to an unusual (for him) 18th place, while reigning World Champion Puigblanque plummeted to finish 26th.

All of a sudden the ball was in Jorg Verhoeven's court and the Dutchman, provisional third in the overall ranking, was now the only finalist who could take the title from Usobiaga. To do so he simply had to win, but Verhoeven failed to endure the pressure, finishing "a mere" 6th which cost him not only overall victory but also a podium position, seeing that in the end he finished 4th in the 2007 ranking. His only consolation () is victory in the 2007 Combined which takes into account both Lead and Bouldering results. As mentioned, the 2007 Lead was won therefore by Patxi Usobiaga for the second year running, thanks to his victory in Valence, three 2nd places in Zurich, Puurs and Kazo, a 3rd place in Imst, two 6th places in Chamonix and Qinghai and 18th in Kranj.

But that's not all. During the final sprint Verhoven lost the podium position which went to Tomasz Mrazek who, thanks to 3rd place in Kranj, won World Cup bronze. Puigblanque remained settled in second, taking home silver. Flavio Crespi from Italy placed second in Kranj but the points gained in Slovenia failed to shift him from 5th overall. Only victory would have earned him a medal, but this goal was taken by the usual, unpredictable and unstoppable Cédric Lachat who won his second comp this season, battling incredibly to the last and even further still in Kranj.

Other surprises worth taking note of are the 4th place Jakob Schubert (a mere 17 and his first ever World Cup appearance), the 5th place of increasingly positive 19-year-old Magnus Midtboe from Norway, 7th place of Klemen Becan and 8th of 21-year-old Valeriy Kryukov from the Ukraine. This could be interpreted as the first signs of a generation change...

In the women's competition Maja Vidmar endured the pressure (this too comes as a bit of a surprise) and won her sixth competition in a row without the slightest hesitation. Reigning World Champion Angela Eiter flopped in Kranj and showed her more "human" side for once, failing to qualify (!) for the final and finishing second overall behind Vidmar.

Another great competition climber, Muriel Sarkany from Belgium, did much better than Eiter and held her nerve to the bitter end. In truth the vice champion was provisional first after topping out in the Semifinal along with Vidmar and Ciavaldini, but she slipped to 8th overall in the Final. But these points netted her third overall in 2007, a result which many would have considered unthinkable at the start of her 2007 comeback after a year off the world circuit. Other climbers worth noting are Irati Anda Villanueva from Spain - she placed 2nd in Kranj and, finishing 5th overall in 2007, is perhaps the athlete who surprised most this season, while 24 year old Lucka Franko from Slovenia placed 3rd in Kranj. On a final note, Natalija Gros from Slovenia placed 9th in Kranj and in doing so won the 2007 Combined.

Tradition has it that Kranj is the final stage of the World Cup circuit. The next season should begin in April 2008 with the Bouldering World Cup, and until then there is plenty of time for the athletes to recuperate their strengths and reorganise their thoughts. Many attempted the Combined this year, and next season we will see if this is simply a way of optimising and varying the training regimes, or if the change reflects a more structured total-climbing transformation...