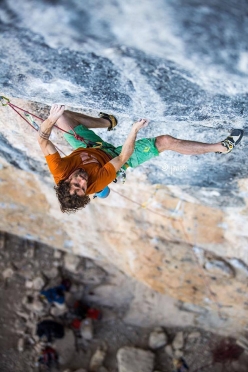 Basque climber Patxi Usobiaga has repeated Papichulo, a 9a+ sport climb at Oliana in Spain. This heralds a great return to form after injury.

Ten years after his second 9a+, Patxi Usobiaga is now back to the same form that in 2007 enabled him to make swift work of La Rambla at Siurana and that, in 2004, netted him the third ascent of Realization at Ceuse in France. Yesterday the 36-year-old climber from Spain’s Basque country redpointed his third 9a+, Papichulo at Oliana. The three routes are separated not only by the long decade-long interlude but above all by a difficult period which, in 2011, saw Usobiaga stop climbing completely due to a herniated disc as the result of a car accident.

Usobiaga’s withdrawal from sport climbing came at the peak of his career: in 2009 he had been crowned World Champion, in 2008 he'd won the Rock Master and in 2007 and 2006 he won the Lead World Cup. On rock, he wrote climbing history by making the world’s first 8c+ onsight, on Bizi euskaraz at Etxauri. This futuristic ascent in December 2007 was doubly impressive because it also happened to be the first ascent of this route.

In mid 2013 Usobiaga started climbing again and the results came in fast; in June 2014 he redpointed 9a again, and after niggling injuries he confirmed this in 2016 with his ascent of Seta Total at Cuenca. Now he’s upped the ante by sending Chris Sharma's Papichulo, and Usobiaga’s joy is comprehensible "I can’t really describe what’s going on in my head right now… It has been an exciting process and I’m so proud of the progress. Psychologically it has been a bit a bit of a mental struggle to find that balance between being extremely motivated and not over-accelerated. I’m glad things fell into place today!"