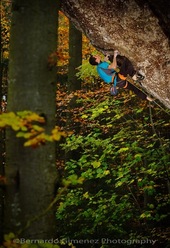 Interview with the Basque climber after his victory in the European Championship and his recent ascent of Action Direct.

The last time we talked about Patxi Usobiaga, the Basque climber had just won the Rock Master 2008. Before that though he had amazed all with the  world's first 8c+ onsight, Bizi euskaraz at Etxauri which, for the record, has been repeated a few months back by local  Iban Larrion who confirmed the grade.

Now the 28 year old, who considers stubbornness his worst defect but also his greatest virtue, is in the spotlight with his victory of the European Championship Lead, and a repeat of the legendary Action Directe 9a in Germany's Frankenjura. This ascent came about during his second pilgramage to Waldkopf, on a day when the temperature rose no higher than 5° C and humidity reached an astounding 90%

Instead of these recent successes, we were interested in finding out what makes Patxi tick. Understand how he gets to grips with less happy moments, such as the period between winning the Rock Master and his European title. We wanted to start from the most critical moment of the 2008 competition season, after that disastrous event in Puurs where he lost all chances of winning his third World Cup in a row. To understand how he managed to come to terms with this defeat so as to continue winning.

Hi Patxi, can you explain the difficulties you encountered after Puurs?
I was really motivated for the 2008 World Cup but after Puurs and my two really big mistakes, I lost all  chances of winning. So I lost all my motivation, this had been my main goal this year... I was really unmotivated.

After Paris you “celebrated” with an ascent of Action Direct and also an 8b+ onsight. You didn't have much time, did you feel the pressure to perform like in competitions?
Pressure at the crag? Crags will never will move and iI have my entire life ahead of me to climb, so no, no pressure.

There are many climbers nowadays who seem capable of easily beating the 9a barrier.
The level of climbers is increasing, this is normal therefore. But climbers like me who compete don't have enough time for these goals, for attempting the routes we'd like to climb. Best conditions are always in spring and autumn, so when I finish my competition career I will try more routes all around the world... America, Asia, Africa... but at the moment this is impossible.

Talking about limits - what route seemed hardest of all?
It always depends on a particular moment, each hardest route is different. When I climbed my first 8c, Mala Vida at Araotz in 1998 I had to try many many times before being successful. The same is true for Honki tonky or White Zombie, I remember them as being really hard, but now people say they are 8c's... It really depends on the moment.

So what were your thoughts about Action Direct?
Action Direct didn't feel really hard. Yes, 9a O.K., but not super hard, even though it isn't suited to my characteristics. All the moves feel hard, aleatory, dynamic and you can fall  off every moves. When I tried it in May, I knew that I'd be able to send the route fast, but I also knew that I might go home empty handed. This is one of the routes in the whole world which all  climbers must climb. Congratulations to Wolfgang Güllich... amazing.

Now you've climbed what you consider to be a trilogy of top routes, Biographie 9a+ (2004), La Rambla 9a+ (2007) and Action Directe 9a (2008). Why these three?
For me these three routes have written the history of sport climbing. Each one is different from the other and this is one of my goals, to climb as hard as possible, even though some aren't my style of climbing.

What do you dream of?
I dream of all the routes I climb. Winning the World Cup in 2006 was a dream. Now all the rest is reality.