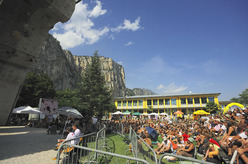 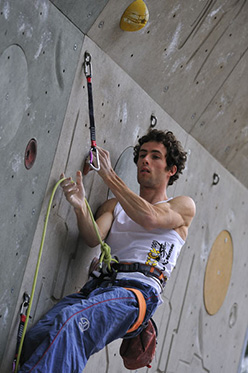 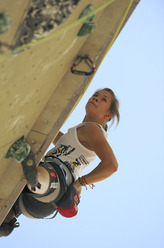 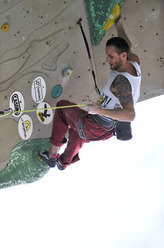 The second day at the Rock Master began with a multitude of hopes mixing and mingling in the Arco air. There were those of Patxi Usobiaga who, after yesterday’s splendid on-sight, finally had the chance of winning his first ever title here in Italy. And there were those of young Johanna Ernst, the 15-year-old Austrian who amazed all on the first day with a dreamlike top. But these were only hopes. Because right behind them were the likes of Ramon Julian Puigblanque, gunning for his 4th gold in Arco, and Maja Vidmar who up until today had always got close to gold but never quite close enough. Once again nothing could be taken for granted, once again only a superlative performance would ensure victory. And once again a good dose of luck would be needed to win the final after-work route.

Those with high hopes of glory had to watch out for the dreams of all the others. Starting with those of Angela Eiter, the queen of the last 4 editions who, with provisional 5th, would certainly give it her all to be on the podium. Just like Tomas Mrazek, in an effort to forget that terrible quickdraw he mistakenly clipped yesterday which cost him lots, if not everything. And all, without exception, were going to do battle to climb as high as possible. It was going to be exciting and emotional and the immense, warm and competent crowd would give anything to see someone reach the top. Because this is the one rule that reigns supreme at the Rock Master: the crowd cheers everyone on, because all of the climbers are true champions.

Manuela Valsecchi, Jenny Lavarda, Christine Schranz and Barbara Bacher received the first applauses as they climbed upwards, one bettering the other in an attempt to climb the first section of the route. Although their fortunes improved, none were able to climb into the tricky upper section. Unlike splendid Mina Markovic who, slowly but surely, reached the beautiful arête beneath the roof, then traversed right to the finishing holds. Well, if the Slovenian wanted to make up for yesterday’s ascent then she couldn’t have done so in any better way. And as if this wasn’t enough, Angela Eiter immediately did the same. She tired, fought hard, even made some mistakes but never gave up and climbed all the way to the top. She deserved all the crowd’s gratitude and even the kisses that someone sent her: Angela is always spectacular!

After these fireworks it was time for the grand finale. Yana Chereshneva climbed up the first section then fell, while Olga Shalagina powered up to the roof in an attempt to defend her provisional third place, before the moment of truth arrived. First out of the starting blocks was Maja Vidmar. She knew what had preceded her, from the isolation zone she had heard the crowd erupt when both Mina and Angela topped out and she knew that the only road to victory went via that top. And it was exactly there where, to the crowd’s delight, she climbed, smoothly and powerfully.

So it was now all up to Johanna Ernst, who didn’t need asking twice to show what stuff she was made of. Seeing how powerfully and securely she climbed the youngster she is made of steel, she literally brushed aside all those uncertainties at the start about any possible outcome. The Austrian resisted right to the very end, just a move from the top she was in clear difficulties but she fought hard and kept it together to reach the chain. The crowd went wild, cheered with joy for those destined to do battle! Winning the Rock Master at 15 years of age with a top on each route is a fantastic achievement! Yes, female climbing has a new “master”.

The spectators were given just a couple of moments to digest the results before the men kicked into action. Ernst had won, followed by Vidmar second, Eiter and Markovic joint-third, Shalagina 5th, Chereshneva 6th, Bacher and Schranz joint 7th, Lavarda 9th and Valsecchi 10th.

Klemen Becan kicked off the men’s after-work and, unlike yesterday, climbed high, almost as high as the big wave. Next out was Thomas Tauporn, but today wasn’t to be his day as he fell low down. It became clear immediately that this route left little margin for error, that the climbers had to control their strength perfectly. This is exactly what Luca Zardini attempted to do and the Italian climbed well, dominating through the roof before getting caught up in the rope and falling. Young Jakob Schubert fought like a lion up through the traverse to the large red volume right beneath the top. His performance was incredible, simply outstanding! So much so that not even Tomas Mrazek managed to equal it, falling just a few moves lower. And next out Magnus Midtboe and Jorg Verhoeven finished even lower still, dashing all hopes of placing third.

When Puigblanque stepped out of isolation the atmosphere in the stadium was one reserved for special occasions. The Spaniard paid his dues with a beautiful race, yes race, upwards via a series of leaps and lunges. He twisted through the roof like there was no tomorrow, then continued straight to the top. No mistakes. As if it had been written in the stars. His climb was fantastic and the crowd cheered in disbelief. But the final act was still to come, Usobiaga still had to produce the climb of his life. The Basque climber needed to climb to at least 4 holds from the top to win. He needed nerves of steel, but instead of climbing calmly he set off tense, almost nervous. But Usobiaga was really on form today and above all he really wanted to win. As he gained height he slowly but surely found the right rhythm, the right speed through the roof to power to the top. The XXII Rock Master was his and he fully deserved it. The crowd gave him a standing ovation, one reserved for only the best climbing stars. Great competition. Great routes. The famous route setting duo Leonardo Di Marino and Donato Lella had done it once again.

But the climbing marathon wasn’t over yet. A sudden shower forced the organizers to suspend the female bouldering competition and just when it looked as if the entire competition would have to be cancelled, the sun came out once more. People flocked back to the lawn to watch the Lattisi Trophy Duel reserved for the top 4 and needed to separate Eiter and Markovic. Vidmar beat Eiter in her heat while Ernst, in a spectacular race, only just beat Markovic. In the battle for third and fourth Markovic climbed faster than Eiter, placing third in both the Rock Master and the Duel. In the final Ernst proved that it was her day, comfortably beating Vidmar and winning her second Trophy today. In the thrilling men’s Duel Usobiaga beat Schubert while Puigblanque eliminated Mrazek. Then a monsterous Schubert beat Mrazek for 3rd place, while Puigblanque beat his teammate Usobiaga, still visibly happy after his first Rock Master title.

So this is how the 22nd Rock Master drew to a close. This year the event amazed more than ever before for its crowd drawing capacity (the lawn was fully packed) and for the competition standard. One thing is certain: Rock Master is synonymous for spectacle and great climbing. Perhaps the secret is simple: a great past combined with a great passion and professionalism. Climbing needs this, just like if need great events such as this Rock Master.