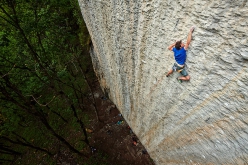 Germany’s Michi Wohlleben has repeated the E9 trad climb Prinzip Hoffnung at Bürs in Austria, as well as the 9a sport climb Speed Integrale at Voralpsee in Switzerland.

9a and E9. To the uninitiated these two numbers and letters may seem identical, but they actually represent two completely different terrains for adventure, the former being pure sports climbing, the latter being even purer trad. Both are towards the upper end of the spectrum

Germany’s Michi Wohlleben is the man who recently demonstrated that he’s equally at ease clipping bolts as fiddling in thin wires, with his ascents of Speed Integrale at Voralpsee in Switzerland and Prinzip Hoffnung at the Bürser Platte above Bürs in Austria.

Unsurprisingly, the mountain guide’s vertical resume also includes hard multi-pitches and interesting winter climbs such as the three North Faces of the Tre Cime di Lavaredo in winter in the Dolomites with Ueli Steck in 2014.