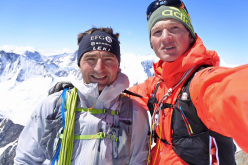 German mountaineer Michael Wohlleben has been forced to pull out of #82SUMMITS, the project to climb all 82 4000m summits in the Alps in 80 days. Swiss climber Ueli Steck will continue climbing alone.

Even those who don’t understand German won’t find it hard to comprehend this video message of German alpinist Michael Wohlleben who announced yesterday that he has had to pull out of the summer project of climbing all 82 4000ers in the Alps: his disappointment is written all over his face. Wohlleben has been forced to stop after landing badly with his paraglider during the fast descent from Schreckhorn, the bruises and the pain in his leg have not diminished and in this state he cannot continue to climb with Steck. The Swiss alpinist will therefore continue on his own, although he admits that the project has changed significantly. Both hope that Wohlleben, once recovered, may join Steck at a later stage.

For the record, on 18 June the duo climbed Mönch but were forced to turn back 100m short of the Jungfrau summit due to bad conditions, which they subsequently reached at 4:30am on Saturday morning. This means that after the start up Piz Bernina, followed by Schreckhorn, Lauteraarhorn, Mönch and Jungfrau, Steck now needs to climb another 77 peaks to complete the alpine tour.