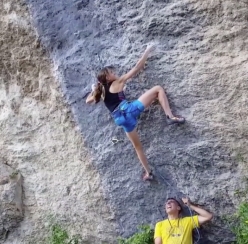 Italian climber Laura Rogora has climbed the first 8c+ section of Biographie at Céüse in France. The extension, freed in 2001 by Chris Sharma, is considered a benchmark 9a+ and was attempted in June by America’s Margo Hayes.

Céüse in France’s Hautes-Alpes is witnessing some feverish climbing activity at the hands of 16-year-old Laura Rogora who is currently up at the crag attempting one of the most famous sport climbs in the world, Biographie. This amazing line of crimps and pockets through the blue streak in the bulging Biographie sector was first bolted at the start of the 1990’s by ace French climber Jean-Christophe Lafaille and freed by America’s Chris Sharma in 2001. Five years prior to Sharma's groundbreaking ascent Ceuse local Arnaud Petit had climbed to half-height, grading this first section 8c+ and realising that, at least in 1996, the next intense 20 meters and 7C boulder finish would need to wait for the next generation.

In the years that followed Biographie has become an important testpiece, repeated by all the world’s best but, until now, never by a woman. This summer the record may finally be set straight thanks not just to one but to two women: Margo Hayes and Laura Rogora.

Both are perfectly capable of such a feat. Banking on her first female ascent of a 9a+, La Rambla at Siurana, Hayes attempted the line in June and made good progress, while Laura Rogora, banking on her 9a’s in Spain and Italy, is now up at the crag working the route. After 4 days the Italian managed to send the first 8c+ section and has worked the upper moves, so her start has been promising. What now lies in store though is that never-ending, extreme journey all the way to the end of the overhang. We’ll see how things develop. In the meantime, good luck to both of them!

Today i sent the first 8c+ part of the legendary "biographie"!! Only few moves left for the 9a+ but still a lot of work to do. @iaia266's video of the first time i sticked the bouldery start of the route #wildclimb #camp1889 #montura @climbskinspain @agripp_climbingholds #climbing #klettern #grimper #loveclimbig #climbing_videos_of_instagram