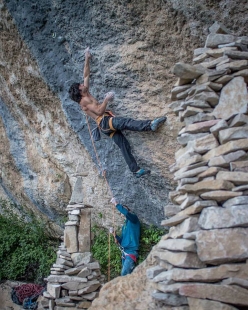 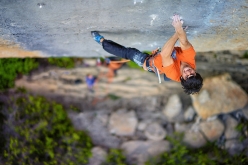 At Ceuse in France Jon Cardwell has redpointed Biographie, the famous 9a+ sports climb freed by Chris Sharma in 2001.

Last week 27-year-old American climber Jon Cardwell successfully climbed Biographie, probably the world’s most famous 9a+ sports climb. Located at Céüse in France, this "king line" was freed in 2001 by Chris Sharma after three years of intensive efforts. Bolted originally by ace French climber and alpinist Jean-Christophe Lafaille, the first section to mid-height was climbed by Arnaud Petit in 1996 at 8c+, while in 2001 Sharma managed to link the successive 20 meters - intense, without decent rests and a 7C boulder crux - thereby breaking into a new level of difficulties at the start of the new millennium.

Cardwell initially attempted the line during his first trip to Europe in 2007, the season his fellow countrymen Dave Graham and Ethan Pringle managed the redpoint, but he soon realised that the sixty moves were simply too difficult. In 2008 he climbed his first 9a, KinematiX at Les Gorges du Loup while in 2009 he began his first serious attempts without avail. After an extended break he returned last summer and made good progress, often in the company of Italy’s Stefano Ghisolfi who stated "I've never seen such a strong mind and determination on a route, every time he failed on he was more motivated and psyched to go again! Beast!"

Last week Cardwell finally managed to clip the anchors, after circa 75 attempts in total. His success is demonstration of great determination, perseverance and patience and after his ascent the American said "It feels great to finally finish this project after years of effort despite any grade it represents. The greatest thing we can take away is the lessons these projects teach us and the places they bring us - to which we owe respect!"

Biographie - or Realization to use the name originally put forward by Sharma - has captured the imagination of all the world’s strongest: in its 15 years existance this blue streak of limestone has been climbed 13 times, by 5 Americans, two Frenchman, two Spaniards, one Japanese, one Italian, one German and one Czech. It is worth remembering that in 2012 Adam Ondra attempted, unsuccessfully, to flash the route (to date 9a+ has not yet been flashed), that Alexander Megos made a ground-breaking one-day ascent in 2014 and that the coveted first female ascent is still up for grabs.