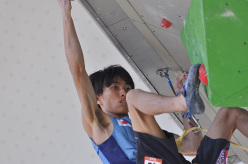 Biographie at Céüse climbed by Sachi Amma and Adam Ondra

Sachi Amma and Adam Ondra have repeated Biographie 9a+ at Ceuse in France.

There's no denying that the 9a+ reference route is Biographie at Céüse. Proof for this comes - just like with the 9a reference route Action Direct in Frankenjura - from the fact that sooner or later all the world's best come to climb this line first freed by Chris Sharma in 2001. And after a few years of "hibernation", the route is now more in vogue than ever before with four repeats this summer alone,

The first was carried out at the start of June by America's Jonathan Siegrist, while in mid-July Alexander Megos amazed all with his single-day ascent of the line. At the end of July Adam Ondra returned beneath this immense overhanging sheet of limestone to set the record straight, after his flash attempt in 2012, and now Japan's Sachi Amma has clipped the anchor after five days of attempts. His fourth 9a+ after La Rambla at Siurana, Papichulo and Pachamama at Oliana. "I was nervous to touch the holds on my first try because it is kind of like touching the history of climbing for me" explained Amma, indicating once again how important this route has become.