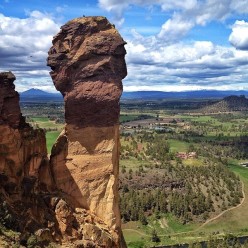 The Monkey Face at Smith Rocks, Oregon, USA, home to Just do It, the super route freed in 1992 by Jean-Baptiste Tribout
Photo by archivio Paige Claassen 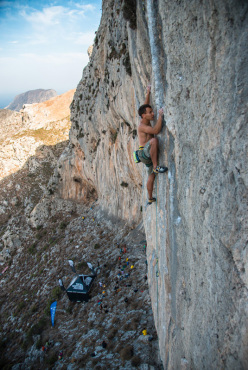 PORTFOLIO / gallery Portfolio: Jonathan Siegrist and Paige Claassen: Biographie and Just do It

Jonathan Siegrist and Paige Claassen: Biographie and Just do It

At Ceuse in France Jonathan Siegrist has repeated Biographie, while at Smith Rock (USA) Paige Claassen has repeated Just do It.

Two important ascents have recently been made by by two American sport climbers. The first is located on the old continent, in France to be precise, where Jonathan Siegrist made a rare repeat of Biographie, the super route at Ceüse bolted by Jean-Christophe Lafaille, climbed to half-height by Arnaud Petit in 1996 and then linked to the top by American Chris Sharma in 2001.

This 9a+ is an absolute reference point for its grade and Siegrist needed about 5 weeks of attempts to get to grips with the line. It is worth noting that apart from the 7C boulder crux at the end – that comes after a n extenuating section of pure resistance climbing – the boulder problem at the start has become slightly harder due to a broken hold. The overall grade remains unchanged and, to prove just how difficult these 30m are, the list of those who have managed to clip the final chain is comprised of only Sharma, Sylvain Millet (2004), Patxi Usobiaga (2004), Dave Graham (2007), Ethan Pringle (2007), Ramón Julián Puigblanque (2008), Enzo Oddo (2010) and now Siegrist.

The second noteworthy ascent comes from the new continent, from Smith Rock where after her world tour Paige Claassen has now repeated one of the most famous sport climbs in the USA, Just do It. Cleaned and bolted by local climber Alan Watts on the East Face of Monkey Face, this long technical stamina test was finally freed by Frenchman Jean-Baptiste Tribout in 1992. Graded 5.14c (8c+), it was long considered the hardest route in the country and one of the hardest in the world. Repeats are rare (Enzo Oddo redpointed the line in 2010) and after 12 days of effort spread out over three weeks Claassen now checks in with the first female ascent of this coveted line.