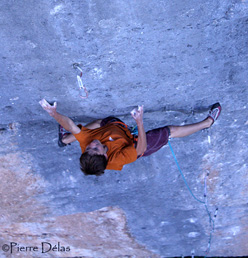 Ever since it was first discovered some 20 years ago, Céüse has firmly established into a summer haven for sport climbers world wide. The crag continues to be developed and various things have gone on during the last couple of weeks, notably the first ascent of Lülü 8c+ at the Berlin sector at the hands of David Lama, Alizée Dufraisse's repeat Arcadémicien des Crépis 8c and, importantly, young Enzo Oddo's rare repeat of Chris Sharma's Realization 9a+.

Oddo managed to redpoint what is widely considered to be the benchmark 9a+ a few days ago after a snapped hold rendered the start somewhat harder, without however changing the overall grade. This ascent marks a significant step forward in the 15-year-old's remarkable career and he shared the following insight for the occasion:

Congratulations Enzo! Tell us more...
First of all the name: there's always been a vast debate about this, Jean-Christophe Lafaille who bolted the line called it "Biographie" while Sharma, the first to complete it, called it "Realization". But I'm not bothered about the name! In both cases you know what you're talking about: a fantastic line which ascends a 30m blue streak up the most beautiful wall I know. For a while a chain at half-height disfigured the line, and this was rightly taken away by Sylvain Millet when he rebolted the route.

Tell us about the difficulties
The hard thing about this route is having enough stamina and being able to recover enough to get past the final boulder crux. The holds are always perfect, medium size, hardly ever small. There are two-finger pockets and flat pockets typical of Céüse, and although there are some sections which are slightly easier, the route overhangs steeply constantly. Height isn't much of a problem as it's possible to use different sequences everywhere.

Last year you climbed numerous 9a's in the Gorges du Loup. Now you've concentrated your efforts further from home.
Yes, this route is legendary and has a place in the history of sport climbing. The first time I went to Ceüse I climbed at the Demi-lune sector and I stood beneath the route in awe. Sharma's determination in making the first ascent, documented in the video Big Up, establishing a new degree of difficulty, the location of the route, the beauty of the rock face... everybody looks up at this line when they walk beneath it. This is the perfect definition of a king line!

Tell us about your redpoint?
I spent one and a half months at Ceüse, my physical form underwent some highs and lows, there was the broken hold at the start, the skin on my fingers suffered... some days weren't easy. I learnt to be patient. And we were a good group of climbers, highly motivated, everyone had a difficult project and we had great fun!

Céüse is...
The atmosphere in Céüse, and especially in this sector, is really special. I do not know what it is: the walk up, the rock, the space, the climbers of all nationalities... When you succeed on a project here it's always something magical. And when you're on a route like this one...