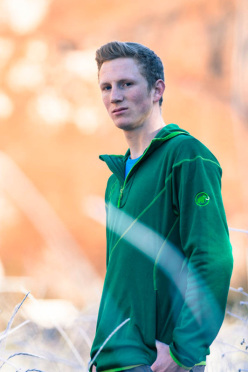 Jan Hojer described it as “one of the most impressive flashes” he had ever seen and seeing that the former European Bouldering Champion has a tendency to downplay performances, it’s certainly with taking stock: yesterday at Cova de Ocell the Austrian climber Jakob Schubert made a first-go ascent of Catalan Witness the Fitness. The problem had been established by Chris Sharma at the start of 2016 and repeated by a handful of climbers, and the grade now seems to have consolidated in the region of 8B+.

27-year-old Schubert made the most of the cave’s vicinity to the Barcelona airport to flash the problem, and this success crowns a memorable Catalonian climbing trip the also netted him the 9b Stoking the Fire at Santa Linya.

Schubert’s ascent is one of the hardest in this impeccable style. Other who have flashed 8B+ include Daniel Woods (Entlinge, Murgtal, Switzerland, 2011) Adam Ondra (Jade, Rocky Mountain National Park, 2015), Jimmy Webb (The Globalist, Finland, 2016) and Ned Feehally (Trust Issues, Rocklands, South Africa)

Even if Schubert is better known for his sport climbing at the crag and as a competition athlete, when he does go bouldering he almost always leaves his mark. In 2015 he sent his first 8C, Bügeleisen sit in Austria’s Maltatal, while last year he climbed twenty 8B problems or harder at Rocklands in South Africa in a mere 17 days.

'Catalan Witness the Fitness' FLASH What a day! Since our flights are quite late we decided to stop at Cova del ocell before heading to the airport. I already thought this boulder would fit me very well (steep climbing on crimps) and I was right. With the perfect support from @janhojer and @marcojubes I was able to flash it, thanks a lot buddies This boulder has been called fb 8c in the past but as nice as a 8c flash sounds I can't agree, guess it is more like low end 8b+. But who cares, I was very positively surprised how good the rock was and how natural and well this boulder climbs! So psyched!!!! by @marcojubes seconds before my go • #lastdaybestday #wennsläuftdannläufts #rockclimbing #bouldering #inshape