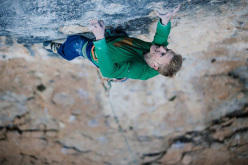 Jakob Schubert repeats Fight or Flight 9b at Oliana in Spain

Austrian sports climber Jakob Schubert capped off his extraordinary year with the a repeat of Fight or Flight, the 9b first ascended by America’s Chris Sharma in 2011 at Oliana in Spain.

The 24-year-old from Innsbruck repeated the route on the 31st of December - the day of his 24th birthday - after circa 15 -20 attempts, a few at the end of November when conditions were poor, the rest during the latter half of December. Schubert told Planetmountain he regards this ascent as "definitely one of my biggest successes in my climbing career" and his hardest redpoint to date comes during the same year in which he managed to send his first 8B+ boulder problem and also won the Lead World Cup 2014 despite a serious finger injury that significantly affected his early season training.

Schubert will remain in Spain for a further 10 days, conditions depending, at it will be interesting to see whether he uses the remaining time to send a multitude of difficult routes like in early 2013 (when he sent five 9a's in less than 10 days) or whether he'll use the time to dabble in something even harder. La Dura Dura is just a few metres away...