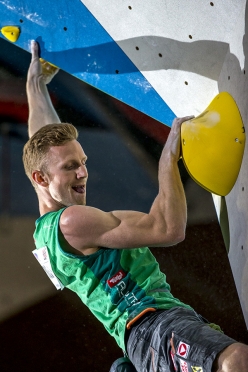 At Santa Linya in Spain Austria’s Jakob Schubert has redpointed Stoking the Fire, his third sports climb graded 9b.

27-year-old Jakob Schubert has started the new year on a roll by repeating Stoking the Fire during his winter climbing trip to Santa Linya in Spain. This 9b was freed by crag keeper Chris Sharma in 2013 and repeated for the first time in 2016 by Adam Ondra.

Schubert checked in with the third ascent after having briefly attempted the route last year, and after having broken a key foothold that made the crux sequence slightly harder still.

Stoking the Fire is now Schubert’s third 9b. In December 2014 he repeated Fight or Flight at Oliana while in January 2016 he successfully clipped the anchors of La planta de Shiva at Villanueva del Rosario.

'Stoking the Fire' Today was the day 3rd ascent after @chris_sharma and @adam.ondra , my third route in the 9b grade Once again I enjoyed to whole process of trying something hard a lot. It feels like I could have send this one much faster but this way I learned some more lessons again and an ascent always feels even better if it took a bit of a psychological battle as well Thanks to all my friends and the rest of the climbers that supported me so much during the past 10 days in Santa Linya! Climbing hard is just so much easier if you are surrounded by nice and motivated people and you are having a blast being outside climbing I will write some infos and thoughts about the route on my @thecrag_worldwide profile soon (link in my bio) Photo: @shintaozawa • #ididit #sopsyched #whataday #santalinya #rockclimbing #9b