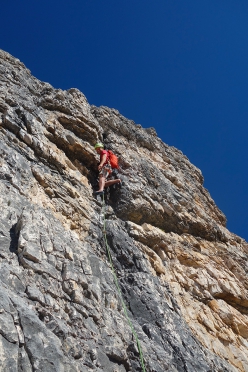 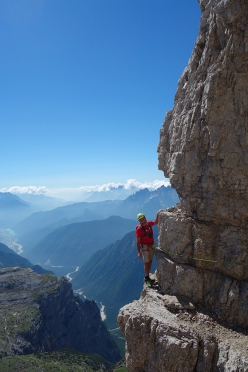 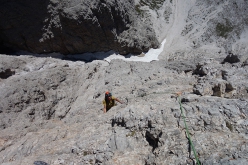 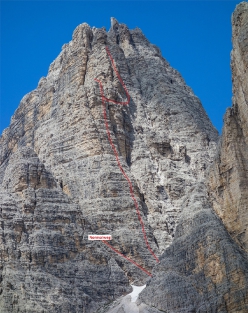 A new route has been added to Cima Grande di Lavaredo, one of the symbols of the Dolomites, just in time to commemorate the 150th anniversary of the first ascent of the mountain's normal route, which will be celebrated later today at Rifugio Locatelli.

The new climb is called Zeitsprung, leap in time, and was first ascended by local Sexten mountain guide Hannes Pfeifhofer and his colleague Dietmar Niederbrunner. The duo established the new route 20 meters above the normal route. Described as following a logical line up slabs, cracks and past good quality rock, the route breaches moderate difficulties of grade V+ UIAA. After the ninth pitch it is possible to continue straight up and join the Normal route, handy if the eather turns foul, or traverse rightwards and then continue upwards for another 5 pitches to reach the ledge at mid-height.

"On the whole it’s a great, interesting climb" was the comment of the Sexten guides, who explained that all the belays are bolted, while normal pegs were left insitu on the pitches. Those wishing to repeat the route should take a full alpine rack including a complete series of friends.

Zetisprung is now the third route established by Pfeifhofer and Niederbrunner on the Tre Cime di Lavaredo, after Petri Heil up Cima Ovest and the route opened in 2018 up Mulo, ie the pre-summit of Cima Ovest.

Earlier this year, Christoph Hainz and Gerda Schwienbacher completed their Grohmann - Hainz up the south face of Cima Grande di Lavaredo. This big new rock climb was timed to celebrate the first ascent the mountain carried out 150 years ago, on 21 August 1869 by the Austrian mountaineer Paul Grohmann together with Franz Innerkofler and Peter Salcher. The celebrations take place at 3 pm in the little church Madonna della Croda, and are followed by a talk at 4.30 pm in the Auronzo refuge with Christoph Hainz.

04.07.2019
Christoph Hainz adds new climb to Tre Cime di Lavaredo, Dolomites
On the south face of Cima Grande di Lavaredo (Dolomites) Christoph Hainz and Gerda Schwienbacher have established Via Grohmann - Hainz, a big new rock climb timed to celebrate the first ascent the mountain carried out 150 years ago, on 21 August 1869 by the Austrian mountaineer Paul Grohmann together with Franz Innerkofler and Peter Salcher.