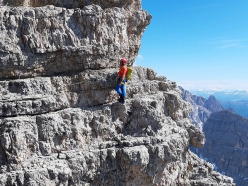 Christoph Hainz making the first ascent of the Grohmann - Hainz, the new rock climb up Cima Grande di Lavaredo in the Dolomites established with Gerda Schwienbacher
Photo by Christoph Hainz 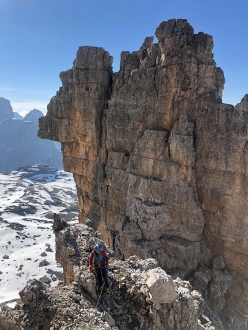 Gerda Schwienbacher making the first ascent of the Grohmann - Hainz, the new rock climb up Cima Grande di Lavaredo in the Dolomites established with Christoph Hainz
Photo by Christoph Hainz 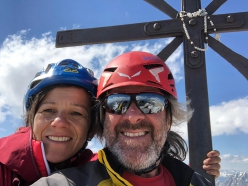 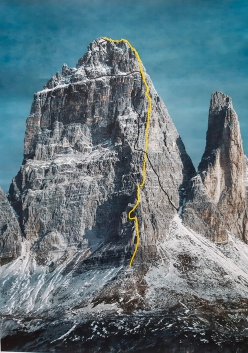 On the south face of Cima Grande di Lavaredo (Dolomites) Christoph Hainz and Gerda Schwienbacher have established Via Grohmann - Hainz, a big new rock climb timed to celebrate the first ascent the mountain carried out 150 years ago, on 21 August 1869 by the Austrian mountaineer Paul Grohmann together with Franz Innerkofler and Peter Salcher.

After Das Phantom der Zinne on the Cima Grande, Alpenliebe and Pressknödel on Cima Ovest and Ötzi trifft Yeti on Cima Piccola, the South Tyroealn mountain guide Christoph Hainz has now aded his fifth climb to the Tre Cime di Lavaredo group, namely Via Grohmann - Hainz up the south face of the Cima Grande di Lavaredo.

Established with Auronzo section of the Italian Mountain Club, the new route was timed to celebrate the 150th anniversary of the first ascent of the normal route of Cima Grande di Lavaredo, carried out on 21 August 1869 by Viennese mountaineer Paul Grohmann with Franz Innerkofler and Peter Salcher.

"I often climb on the Drei Zinnen and I’ve been thinking of climbing something new on Cima Grande for quite a while" explained Hainz “I wanted a route that was beautiful, easy, a sort of second normal route that was reminiscent of what Grohmann had achieved, climbing all the way from the lowest point to the summit."

The new route was started in October and November 2018 and then completed in June 2019 Hainz established the first 20 pitches ground-up with climbing and life partner Gerda Schwienbacher, while the remaining 27 pitches were established ground-up but on his own. The first free ascent, carried out with Schwienbacher, was done on 8 June: V- or IV A0 (obligatory IV), 600 meters elevation gain,1050 meters in total.

Hainz has described the line as an "Alpinklassiker", a new classic in the Alps therefore, adding that it provides "pleasant climbing on quite good rock past walls, towers, ledges and gullies". Given its considerable length, he also offered the following advice “for those wishing to climb the entire route to the summit, I recommend you know the descent since, given how long it takes to climb the whole route, finding the descent in poor visibility isn’t easy. At various stages it is possible to reach the normal route and also to bivouac."

The new Via Grohmann - Hainz climb, and Paul Grohmann the mountaineer, will be celebrated this summer, in particular on 21 August at the Tre Cime di Lavaredo and nearby Auronzo.