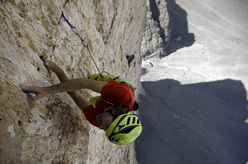 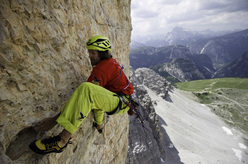 Another summer, yet another new route on the Tre Cime di Lavaredo. To be precise, a new route for the mountain guides Christoph Hainz and Kurt Astner who in July freed their Pressknödl up the Cima Ovest di Lavaredo, to the left of the famous Spigolo Scoiattoli.

Pressknödl was first ascended from the ground-up over a four-day period in August 2009 by Hainz and Astner, then freed by Astner on 03/07/2010. Two days later Hainz carried out the first repeat. Even if the 400m are protected by "solid bolts spaced in typical Dolomite style", a set of friends is needed to integrate the in-situ pro.

The difficulties are concentrated (hence the name) in the first 5 pitches - a 6a+ warm-up is followed by three 7b's, one 7a+ then the 7c crux. According to "master" Hainz the new routes proves that "our Alps continue to offer exciting challenges for those who manage to interpret them with the right spirit." We couldn't agree more! Especially since, as is this case, the route is situated in the magnificent Tre Cime di Lavaredo, with their vertiginous exposure of which dreams are made of (those who know the "panorama" of the Via dello Spigolo degli Scoiattoli to the left know what we're talking about...).

Pressknödel is the fourth in a series of routes established by the partnership Hainz & Astner on the Tre Cime di Lavaredo: "Alpenliebe" (IX, Cima Ovest, 1998), "Ötzi trifft Yeti" (VIII+, Cima Piccola, 2000) and "Das Phantom der Zinne" (IX+, 550m, Cima Grande, 2005). To which must also be added Akut, the demanding route first ascended by Astner and Urban Ties in 2000 on Cima Ovest with difficulties up to 8a and also ISO 2000 established together with Kurt Brugger in 1998.