Punta Frida Tre Cime di Lavaredo and the line of The Lights from the other World (Michal Coubal, Ája Coubalová 07/2018)
Photo by Michel Coubal 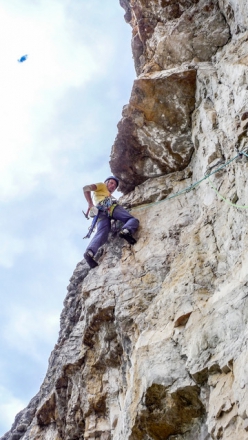 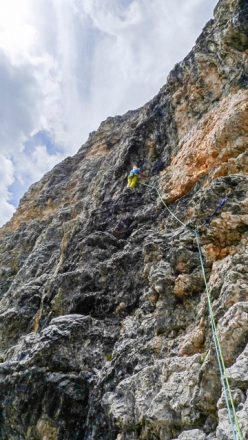 Czech alpinist Michal Coubal reports about a first ascent, carried out with Aja Coubalova up Punta Frida, Tre Cime di Lavaredo, Dolomites: The Lights from the other World.

The fact that my brother and I would climb in one area every weekend for some time, and then never return was somehow part of our nature. The real reason was probably in those 11 nights spent on Cima Grande during the summer months of 1988 and 1989. But 30 years later, my heart yearned to observe a familiar scene, to see places I'd seen so often in the past, and also to set foot in Rifugio Locateli once again. A mountain hut which, thanks to the warden, always felt like home. In short, I wanted to confront my old feelings and visions with today's feelings and views. And, most of all, I wanted to climb with my daughter Anna, just like I did with my brother years ago.

After exploring a bit, we chose the Cassin route on Cima Picolisima for our first day. In 1983, my friend Martin Veselý and I crossed the Yugoslavian-Italian border close to Tarvisio and headed towards the Tre Cime. We lost Martin while hitchhiking and only saw him again back in Prague, but we made it all the way and spent a wonderful climbing week here.

We spent the night close to the hut in a WW1 tunnel. Money was scarce and we were saving it for 6 slings and 5 carabiners. We visited the hut only to get water from the bathroom, little did we know that the hut warden watched us climbing the North Faces through his large binoculars. Two days before the end of our stay, he visited us in the tunnel and took us to his hut, saying that he wanted to meet the romantics who would rather sleep in a cave than in the comfort of a chalet. The next day we waved to him from the Spigolo degli Scoiattoli on Cima Ovest.

Anna climbed on lead and explored the local challenges, while I enjoyed the view from down below. The route was not disappointing. I felt proud that my memory is one of the few things that still serves me well, just as it did 35 years ago when we climbed this wonderful route. I recognised the belay stations, the chimneys and ramps but for the love of God, initially I couldn't remember how to get back down. When the third abseil started with a rock wedged in a chimney and ended with old, loose slings and rusty screwgate biners, I knew exactly where we were. But all’s well that ends well.

For the next 2 days of our three-day nostalgia, I promised Anna something new on the NE face of Punta Frida, in exchange for a promise that she wouldn’t send me and Vendula to a retirement home sooner rather than later. According to my information, a surprisingly logical and direct route on this face could go free so we went to see it the next day. I was not sure about the second pitch. The face was yellow and orange with small white overhangs and it was noticeably similar to the rock found on the north face of Cima Grande. The first pitch was a nice climb with a crack. The second pitch was just as we expected it. The rock was quite brittle, structured into fish-like scales and pockets that seemed to be waiting for me to sneeze. I proceeded slowly, hammering in some loose pitons, and I even had to tie a few knots, but it was fine. When I arrived under a small white overhang I told Anna that I needed time to think something through, and told her to remain under another overhang. I then took a hammer and removed all the loose rocks I could get my hands on. For the rest of the day, Anna kept reminding me that her definition of thinking is very different from mine. But I was content. It would work.

There were many people, cars, binoculars and tripods with cameras around the Auronzo hut, all waiting for the lunar eclipse. However, the moon soon disappeared behind the dark clouds and at 10 p.m. a storm started. Torrential rain, hailstorm and contiuous lightning, again and again until it all ended at 3 a.m. Our alarm clock was set to to ring in an hour and a half. The sun was rising, everything was peaceful, and the sky was clear. There was no sign of the storm that had raged just a few hours earlier. We then set off to do what I know so well and love doing even after all these years.

After climbing past an overhang, we started up classic terrain with cracks, a ramp and even with a chimney that soon turned into a wide crack. An overhang with a crack above the 5th belay station is worth mentioning. It was formed by several downward-facing daggers, loose at the beginning but solid at the top. We were saved by our Friends, because driving in a piton would probably have resulted in a great change to this part of the face. Above the ramp, I was surprised to find nice and solid rock.

No one would die on the descent today. We kept our eyes open. Although it was a little rough at times, once again after many years another great adventure in the Dolomites came to end. Memories became mere flashes of light from elsewhere.