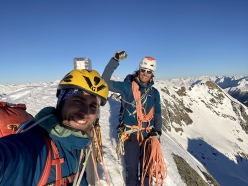 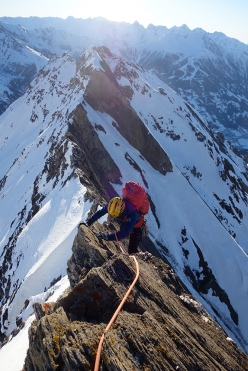 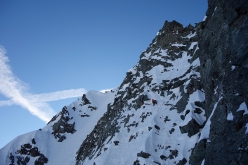 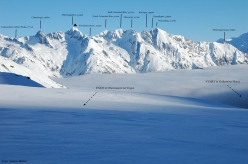 From 2 -3 March 2021 Matthias Wurzer and Vittorio Messini, two mountain guides from Kals, Austria, completed a winter ascent of the Virger Nordkette (Frosnitzkamm) from Hintereggerkogel to Galtenscharte in one and a half days. Messini reports.

The Virger Nordkette, also known as the Frosnitzkamm, is located in the Hohe Tauern massif in Austria's East Tyrol, north of the villages Matrei and Virgen, and extends from east to west along several remote three-thousand-meter peaks. The rock on this exposed ridgeline is predominately brittle and is compact in only a few sections, and this is one of the main reasons why these peaks - local climbers apart - are rarely visited apart In winter, however, the loose rock freezes tight and with the appropriate snow and weather conditions, a climb can be much safer than in summer.

Alois Mariacher, Gerhard Berger, Sigi and Romed Girstmair appreciated this fact in the eighties and managed to cross the Virger Nordkette (from Bonn-Matreier Hütte to Ochsenbug) for the first time from 28 - 29 December 1984.

Our story actually begins about 20 years later. In the years 2005-2007 I was often out and about with my former climbing partner Martin Mariacher (Alois Mariacher’s son) and of course we also spent a lot of time in his backyard mountains above Virgen and Prägraten.

We often talked about tackling the project, in summer maybe, because back then winter seemed too difficult for us. We never knew though when the right time had come... Unfortunately, we never made it because Martin lost his life far too early, in 2007 while descending from Mittereggerspitze towards Galtenkogel. This tragic event still leaves us all speechless to this day. Over the years I kept thinking about this project, but somehow it wasn't to be until this winter.

After a cool ice climbing trip in the western Alps in mid-February, my colleague Matthias Wurzer and I talked about doing something together again. The stable weather, the long period without snowfall and, above all, a few days off enabled us to tackle the Virger Nordkette project.

On Tuesday, March 2nd, we started skinning at 2:00 am from Zedlach near Matrei and slowly made our way uphill towards the Wodenalm. Although we tried our best to take only the most important things with us, our rucksacks were plain heavy. We stashed our skis just after Wodenalm because the snow was hard enough to ascend with crampons to Hintereggerkogel.

We passed wild avalanche debris as we crossed the simple ridge to reach our first summit, Hintereggerkogel, which we tagged just before sunrise. From here on it was important to be careful, because although the ridge that leads to Ochsenbug is not difficult, it is always exposed.

After a long rest on this, the most popular mountain in the Virger Nordkette range, we continued gaining and loosing height, abseiling, climbing past cornices, to reach Kristallspitzl, then Knörrgn, Misekokt and Göriacher Röten. Here the ridge levels off for a moment before it drops down into the Firschnitzscharte gully, which we reached in the late afternoon. We climbed the gully and after a couple of cool mixed pitches we reached Mittereggerspitze, where we pitched our small tent and enjoyed an incredibly beautiful sunset before dinner.

Even if one doesn't usually sleep too well in a bivy, thank God it gets light sooner or later, but it usually takes a while to get going again. Due to the aforementioned tragedy, we did not downclimb the first section from Mittereggerspitze, but instead we made two long abseils down into the couloir.

Here the character of the traverse changes considerably, because the climbing becomes more sustained, past sharp spikes and towers. Furthermore, there was significantly more snow, which meant we gasped for breath as we broke a trail on the north face. We could feel the fatigue setting in as we climbed the last ridge to Galtenkogel and we were happy to finally reach the Galtenscharte col. The two towers after Maurer Röte had to be tagged in order to reach the deepest point of the col.

Here our traverse ended, amazing! It often takes years to prepare yourself mentally for a project, then once you've completed it, it's gone far too fast!

In the early afternoon we took the quickest route down into the valley to Obermauern close to Virgen, where a good, somewhat worse for wear friend was waiting for us with beer and Schnapps by the car. But that's another story...