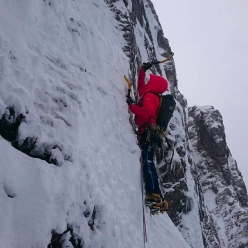 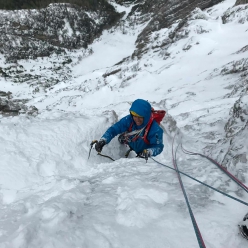 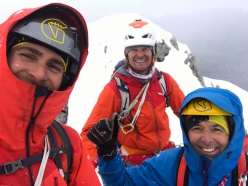 Mountaineering in East Tyrol: Austrian alpinists Vittorio Messini, Matthias Wurzer and Hans Zlöbl have made the first ascent of Kitchen Window, a 'severe mixed climb' up the North Face of Bischofsmütze in Austria.

Bischofsmütze is the first summit of the so-called Spitzkofeltürme, the series of towers that form one of the most evocative skylines of East Tyrol. The mountain is famous for its important, albeit at times loose, alpine ridge climb.

The north face of Bischofsmütze dominates the Lienz basin and the small village Leisach. Thanks to this rainy and snowy spring numerous lines of ice formed across the Lienz Dolomites, including the very obvious line up Bischofsmütze’s north face.

Hans Zlöbl, Matthias Wurzer and Vittorio Messini all observed the conditions independently, as indeed many other mountaineers did across East Tyrol, and it was a coincidence that the day before the ascent they discussed the line. The prolonged, atypical cold at the tail end of the had finally made it come into condition.

The following day they trio set off determined to complete the climb. After pedalling up with their e-bikes and walking through the wild and steep walk Spatenbach cauldron, the ascent began in earnest. At the start they followed small gullies and chimneys, then they made a long and exposed transverse at half-height. Here they wondered whether the snow would hold and if it provided adequate protection. Everything ran smoothly though and, despite some long runouts, they managed to follow the natural line rightwards.

This section of the route is probably shared with"Direkte Nordwand" - a summer rock climb first ascended in 1940. Finally, via a ramp, they reached the pre-summit of Bischofsmütze and, having made their way around the south tower, they finally reached the main summit by following the east ridge.

Abseils were then made down the gorge that separates Grauer Turm from Bischofsmütze and after scrambling down this another three abseils deposited them close to the start of the route.

On what was probably one of the last cold days of this winter season the three climbers managed to experience another small adventure, right above the city…

The 500m new route has been called Kitchen Window as it can been seen directly from Zlöbl’s kitchen and has been graded M5/6.