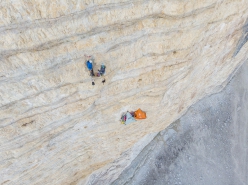 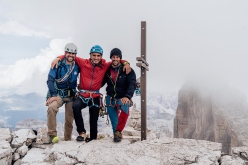 Nicola Tondini, Alessandro Baù and Claudio Migliorini on the summit of Cima Ovest di Lavaredo, Dolomites after having freed each pitch of Space Vertigo
Photo by Matteo Pavana 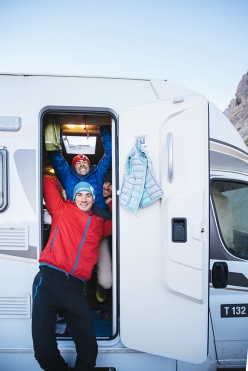 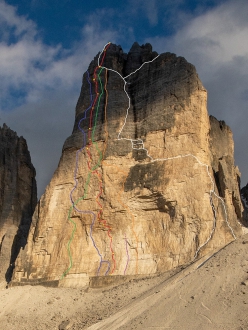 Taking advantage of the stable September weather, Italians Alessandro Baù, Claudio Migliorini and Nicola Tondini returned to the Dolomites a few days ago to free every single pitch of Space Vertigo, their huge project established ground-up between 2016 and 2019 on the North Face of Cima Ovest di Lavaredo. Protected with wires, cams, pegs and bolts at the belays only, the route tackles an elegant line to the right of Via Couzy and climbs completely independently all the way to the summit, apart from one belay shared with Alpenliebe.

All three had returned to the mountain earlier this summer to work the pitches and, after hauling provisions and two portaledges a third of the way up the route, on the 9th of September they commenced their free ascent. The start proved far harder than expected though, due to the humidity and total lack of friction, and by the end of the first day they had only freed the first 3 pitches instead of the first 6 as planned. Instead of sleeping in the portaledges they therefore returned to the ground and set off early the next morning, ascending the fixed ropes before launching into the yellow rock in the centre of the face. This contains theto meat of the route and all the pitches were freed over the next two days. At circa 14:00 day 4 they reached the summit; each pitch had been climbed free by at least one of the three mountain guides.

The route’s main traits are its relentless difficulties coupled with hard obligatory climbing. While the grades obviously still needed confirming, the crux is somewhere in the region of IX+/X-, five pitches are graded IX/IX+ and another eight weigh in at VIII+/IX-. All above Cima Ovest’s vertiginous void. Difficulties diminish considerably on the remaining seven pitches. "It’s a nice kick in the teeth" was the first comment. More details will follow in due course.

01.01.2016
Gigi La Trottola, new Mulaz climb in the Dolomites by Baù, Migliorini, Zaccaria
The report by Alessandro Baù who, in summer 2015 together with Claudio Migliorini and Giovanni Zaccaria, made the first ascent of Gigi La Trottola (IX, 450m) up the west face of Mulaz, Pale di San Martino, Dolomites.