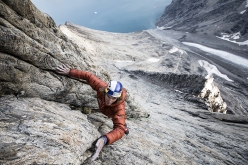 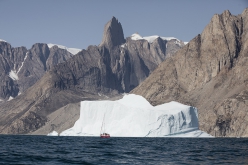 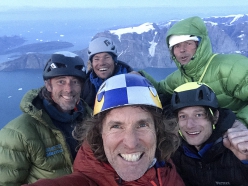 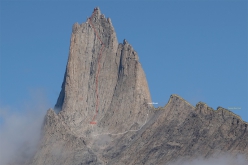 Climbing independently and 'by fair means', last August the Germans Stefan Glowacz, Philipp Hans, Markus Dorfleitner, Christian Schlesener and photographer Moritz Attenberger established a new multi-pitch rock climb up Mt. Grundtvigskirken. This striking 1977m peak is located on the east coast of Greenland and has been climbed in the past by previous parties.

Just like in 2018 when the German Grundtvigskirken attempt ended prematurely due to unprecedented snowfall, this year’s expedition was marked by the desire to leave the smallest possible ecological footprint. As a result the two-month expedition began at the train station in Starnberg, Germany, on 7 July where the team of five began their journey to Scotland via Paris, London, and Glasgow by train. There they boarded the Santa Maria steal yacht and after a stormy crossing past the Hebrides they reached Scorebysund on 30 July and set up base camp at the foot of Grundtvigskirken, intent of climbing a new route through the mountain’s 1300m north face.

The team won’t forget the next day in a hurry: Glowacz and climbing partner Philipp Hans were climbing the first pitch when all of a sudden a table-sized granite block broke off about 100 meters above them, shattering into a thousand pieces as it hit a ledge about 50 meters above the climbers. Glowacz was injured on his right thigh and right forearm, while Hans escaped unscathed.

After the initial shock the team decided the change objectives due to high risk of further rock fall and therefore set their sits on the south ridge, attempted by a British Army expedition in 1978.
Association failed here at their attempt in 1978. despite his injuries Glowacz managed to continue climbing, but only after taking pain killers

"It’s only now that the effects of the accident are making themselves felt" wrote Glowacz in his diary "The mental consequences of the incident come to forefront only now on this hard terrain… I feel insecure. I struggle with myself on every hold, every step of the way. Panic rises within me again and again, especially at exposed sections. It‘s physical and mental torture. I feel like I'm a shadow of my former self. I try not to let it show. But the guys know exactly what’s going on. They reassure and motivate me again and again. I owe them a lot."

After having negotiated circa 1500m of terrain and spent the night in "one of the most beautiful places in the world", on 7 August the team climbed another 15 pitches past perfect rock to reach the summit, establishing what is only the second route on the face. Half an hour later they began their descent and returned to their bivy 24 hours after having set off. They descend safely to base camp on 9 August before beginning the long return home, by boat and train once again. They returned home on 28 August and called the new route Suffer and smile - boys don’t cry.

Glowacz, winner of the Arco Rock Master in 1987,1988 and 1992 and runner up in the 1993 Lead World Championship, has been carrying out expeditions worldwide for decades, more often than not with his hallmark by fair means style. Climbs include Odyssey 2000 up Polar Bear Spire on Baffin Island (2000), La Conjura de Los Necios up El Gigante in Mexico (2002), Vom Winde verweht up Murallón in Patagonia (2005), Fegefeuer up Acopan Tepui in Venezuela (2007), Take the long way home on Baffin Island in Canada (2008), Behind the rainbow up Roraima Tepuis in Venezuela (2010) and The Turret on Baffin Island (2016).

23.11.2010
Stefan Glowacz on Venezuela expedition
Stefan Glowacz and Holger Heuber are leading an expedtion to complete a line on Roraima Tepuis, Venezuela, initiated this spring together with the late Kurt Albert.