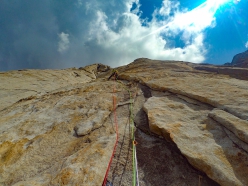 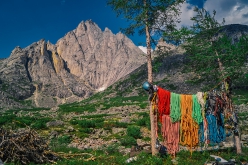 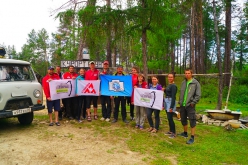 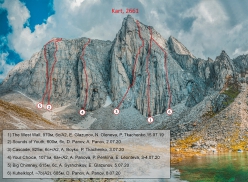 Dmitrii Panov reports about a Russian summer 2020 climbing expedition to Peak Kart and Peak Mechta, situated in the South Muysky Ridge area of Siberia. During the 20-day expedition the climbers forged 8 new routes, made the first ascents of 8 mountains and completed 2 ridge traverses.

The South Muysky Ridge is a hard-to-reach and little-explored area of the Trans-Baikal region with great potential for big wall climbing. The ridge consists of several clusters of mountain peaks with granite walls ranging in height from 500 to 800 meters and the entire area is already an object of increased interest among Russian climbers. A distinctive feature of the area is the large number of bears that are regularly found in the taiga and mountainous terrain.

The first successful expedition to the peak Kart area was in 2019. At that time Yevgeny Glazunov, Pavel Tkachenko and Nadezhda Olenova made several first ascents of the surrounding peaks, climbed one route on peak Kart and one route to the peak Mechta (the peak Dream - a previously undisclosed and unnamed mountain). Also, Eugene made a solo first ascent of an unknown peak, naming it in memory of his brother Sergei Glazunov, who died in 2018 on Mount Latok I. More information about this expedition can be found in an American Alpine Journal report.

Peak Kart is located 30 kilometers north of the village of Baunt, which, with a good combination of circumstances, can be reached by jeep from Chita. In order to reach peak Kart, you need to travel 15 kilometers on an all-terrain vehicle and continue for about 25 kilometers on foot through the taiga. In order to reach peak Mechta from peak Kart you need to cross two passes and walk about 10 kilometers on foot. The remoteness of the area means that that any expedition must be completely autonomous, and that in case of an accident, rescue possibilities are minimal.

In our case, our expedition took place in rather difficult weather conditions. We were lucky enough to make it to the village of Baunt and peak Kart without heavy rains, which made it easier to cross the rivers by car and on foot. However, any serious ascent was accompanied by light rain and thunderstorms, often the key sections of the routes had to climbed in a downpour.

Transporting food and equipment to the base of peak Kart from our Base Camp (the 4x4 drop-off point) took 5 days. Each expedition member had to walk this route twice, before making a break to climb the routes.

The continuous rain and freezing temperatures that began on July 16 forced the team to cancel the expedition a week earlier than planned. It was the right decision, after a few days all the rivers became inflated with water, moving across the taiga became problematic and the village of Baunt became cut off from civilization.

13.10.2015
New Australian rock climbs in Siberia's Bilibino
In July and August this year, Chris Fitzgerald, Natasha Sebire and Gemma Woldendorp from Australia climbed several new routes on the previously unclimbed granite wall of the Finger Crack Cirque and on Weasel Tower close to the town of Bilibino, Siberia, Russia.

17.09.2014
Bilibino big walls climbed by Australians in Russia
This summer Australian climbers Chris Fitzgerald and Chris Warner, acting on a photo taken by a Russian friend, travelled to the remote Bilibino area in eastern Russia where they made the first ascent of 6 new routes on what they believe are 4 previously virgin peaks. The report by Chris Warner.