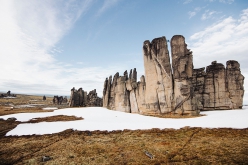 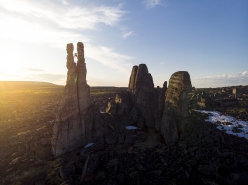 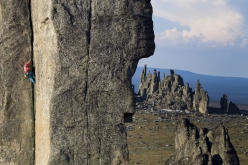 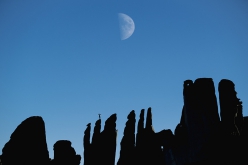 Kilian Fischhuber, Robert Leistner and Galya Terenteva have made a series of first ascents up the Sundrun Pillars, Ulakhan-Sis in Siberia.

In June 2018 a small team comprised of Kilian Fischhuber from Austria, Robert Leistner from Germany and Galya Terenteva from Russia made some remarkable first ascents of the granite Sundrun Pillars in Siberia.

First discovered by biologist and photographer Alexander Krivoshapkin as he flew across the vast area in a helicopter during a trip to count wild reindeer herds, the Ulakhan-Sis area was subsequently explored by fellow photographer Sergey Karpukhin in 2016 and 2017. Last summer he returned for further exploration and to accompany the trio of climbers.

After a three-day hike through the tundra the team reached the "Granite Cities", so-called because of their resemblance to skyscarpers, established basecamp and proceeded to make a series of first ascents.

35-year-old, five times Bouldering World Cup winner Fischhuber told planetmountain.com "we climbed 12 towers in total and placed, only when there was simply no other option, six 8mm hand-placed bolts, subsequently removing the hangers for optical reasons. Seven towers were climbed completely trad. The grades weren’t particularly hard, max 7c. But the actual climbing was always very demanding as the rock quality worsened the higher we got, at times it seemed really soft!"

It’s worth noting that Robert Leistner, renowned for his testpieces in Germany’s Elbsandstein, rates one of the new climbs as one of the psychologically most demanding routes he’s climbed to date.