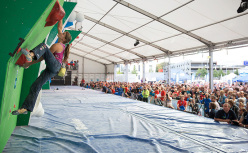 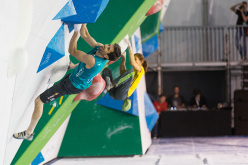 "The spell is finally broken. I've been working towards this moment for over 10 years... A dream has come true! " These were the words of Kilian Fischhuber, one of the most successful athletes of all times and five-times winner of the Bouldering World Cup who in Eindhoven on Sunday evening won his first single competition, namely the European Bouldering Championship. An important title that had eluded him, one that was missing from his long list of victories (read 20 World Cup stages) that had all bar the European and World Champion title.

Fischhuber beat the winner of the Bouldering World Cup 2013, Russia's Dmitrii Sharafutdinov and his teammate Jakob Schubert. As often happens in the bouldering, the dream went down to the wire and came true on the last problem that proved fatal to the great competition revelation, Italy's Michael Piccolruaz. For a brief moment the Italian surprise even found himself in the lead in the Final, but the last problem proved simply too difficult for the 17-year-old from Meran. Not so for Fischhuber who flashed it with ease to clinch the title thanks to three problems send in 4 attempts, one less that Sharafutdinov and three less than Schubert. In fourth place, just ahead of Piccolruaz, came Germany's Stefan Danker with two problems sent, while France's Guillaume Glairon Mondet finished 6th.

The women's competition was marked by the thrilling head-to-head between two-times Bouldering World Champion Anna Stöhr – who travelled to Eindhoven to defend her European title - and the strong Slovenian Mina Markovic who seems equally at ease with or without the rope. So much so that after the first three problems Markovic lay joint equal with Stöhr; both had sent three problems in 6 attempts and once again it was the last problem that decided everything . Stöhr didn't wait to be asked twice: she sent the problem immediately and this flash put Markovic under enormous pressure... the Slovenian sent the problem yes, but on her third attempt. Two too much, but she'd done ample to secure silver, ahead of reigning World Champion, France's Mélanie Sandoz who sent a mere two problems in the final. To demonstrate how difficult these problems really were just glance at the rest of the field: Monika Retschy from Germany and the Russians Anna Gallyamova and Ekaterina Andreeva finished 4th, 5th and 6th respectively, all without sending a single problem and separated by the number of attempts needed to reach the bonus zones.