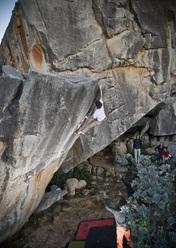 What do you get if you stack two of the best boulders in Rocklands, one of top of the other? The answer is Airstar, the Fb8b problem first ascended by Kilian Fischhuber this summer in South Africa's bouldering hotspot. He provides the story.

Airstar by Kilian Fischhuber
"Airstar was an old project. Klem Loskot, Fred Nicole, Bernd Zangerl and many others had tried it. This year when I returned to Rocklands Nalle Hukkataival told me about it, and both he and Kevin Jorgeson tried it a bit.

I tried the problem more or less by chance and I was taken in by its dynamic moves. After having attempted the first dyno for a day with Berni Fiedler I decided to check out the final dyno with a rope - for the unlikely event that I would manage the leap. The top proved far harder than I thought. The flake you dyno to and which leads to the lip is hollow and you hold it as a crimp. In addition, there were no footholds. To stop my motivation from stealing away I marked two points onto the rock and this really helped! I managed to toprope the last move.

A few days later I attempted the problem with a rope again to calm my nerves on the top section. As the sun left the wall late in the evening I decided to give it a go. I had loads of pads, two really motivated spotters, a few enthusiastic onlookers and a six meter crane for the film were all further reasons, not to let go.

After a few attempts - always too short - I stuck the dyno. I swung towards the equator and only just managed to hold the swing. Only when I stopped swinging did I realise that there was only one way out: upwards. I was totally concentrated and for a moment forgot about the height, missing footholds and that muffled, hollow sounding Flake. I climbed to the lip and was overjoyed on the top.

I've rated the problem 8b, since the difficulty lies "only" in its single long move."