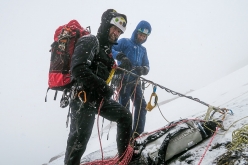 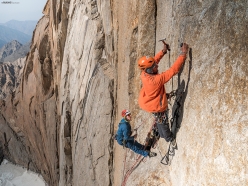 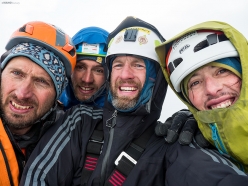 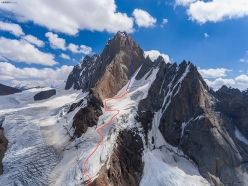 After travelling by minivan from Osh to Uzgurush, the Slovak mountaineers Martin Grajciar, Ondrej Húserka, Jozef Krištoffy and Vladimír Linek transported 500 kg of equipment with the help of horses and donkeys to the Ak-Su glacial moraine. In bad weather they then spent the next few days carrying their gear across the Aktjubek glacier to the base of West Face of Aleksander Blok, where they identified a possible line up the unclimbed righthand side of the face.

On 6 August in foggy weather the Slovak mountaineers started their climb, ascending 200 m of 60o ice. Fixed ropes were rigged on these first four pitches and the next day was then spent hauling gear to the bottom of the face. On 6 August they climbed the next 70° ice pitch that led to the first rock pitch, graded UIAA 8. Bad weather set in for the following days, but nevertheless the Slovaks pushed on through the overhanging wall with the use of free climbing and aid climbing to establish a portaledge camp at the top of pitch 7.

Temperatures were low, dropping down to -10°C at night and rarely rising above zero during the day. On 24 August they were perched 50 m below the summit ridge and decided to attempt a summit push the next day. On 25 August they reached the end of their fixed ropes, climbed one last pitch and then traversed 30 meters left to join up with Gunko route. The four connoted via a 55° snow couloir for 80m to reach the ridge, where they were caught in a thunderstorm just below the summit. They sheltered in couloir for half an hour and luckily the storm abated, allowing all four members of the expedition to stand on the summit of Pik Aleksander Blok at 18:00.

During the next three days the Slovaks freed all the remaining aid pitches. The hardest, the 50-meter pitch 13 situated at an altitude of 5000 m, was climbed pinkpoint style (with gear insitu) by Kristoffy and graded UIAA 9+. The 900 meter high Summer Bouquet is probably the hardest free climb in area. The mountaineers established the climb from 6 to 28 August, during which they enjoyed just one day of perfect weather.

22.10.2015
Russian women repeat Gunko route on Alexander Blok Peak in Kyrgyzstan's Aksu
A female team of Russian climbers comprised of Marina Popova, Julia Borisova, Alexandra Mentovskaya and Olesya Babushkina has made the first repeat of the Gunko route (950m, Russian 6A) on the West Face of Peak Alexander Blok (5239m) in the Ak-Su region in Pamir Alay, Kyrgyzstan.

27.01.1997
Pamir Alay, a granite climbing paradise
The Pamir Alay is an immense region wedged between the republics of Kirghistan and Tajikistan , dominated by the giant Pic Communism (7495m) and Pic Lenin (7134m), once the highest mountains in the now defunct Soviet Union. By Marco Borghetti, Roberto Invernizzi and Stefano Righetti.