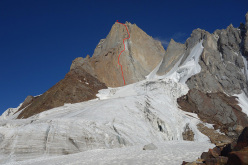 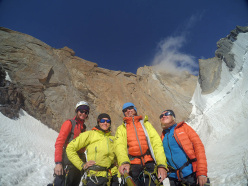 A female team of Russian climbers comprised of Marina Popova, Julia Borisova, Alexandra Mentovskaya and Olesya Babushkina has made the first repeat of the Gunko route (950m, Russian 6A) on the West Face of Peak Alexander Blok (5239m) in the Ak-Su region in Pamir Alay, Kyrgyzstan.

A small team of female mountaineers from Siberia's Krasnoyarsk composed of Marina Popova, Julia Borisova, Alexandra Mentovskaya and Olesya Babushkina has repeated the route on West Face of Peak Blok, first climbed by Vladimir Gunko, Georgiy Kalita and Pavel Vlasenko in 2010. Three and a half days climbing the mountain, cold nights spent in a portaledge, difficult weather conditions - all this resulted in a great experience for the women.

Alexander Block is located in Laylak Gorge, in the Turkestan range of the Pamir-Alay, Kyrgyzstan. There are no simple routes leading to its summit: the easiest one according to the Soviet grade system is estimated at 5B and usually used for the descent (the Russian mountaineering scale currently ranges from 1A - 6B (1A, 1B, 2A, 2B etc) and includes factors such as technical difficulty, altitude, length, and commitment, Ed.)

In January 2010 Gunko, Kalita and Vlasenko established a difficult route up the West Face which follows a line similar to the Valiev route which had been damaged by rockfall. Despite its vicinity, the Gunko route shares only 5 of its 15 pitches with the original Valiev route.

Making the first repeat of the Gunko route was the female team's prime objective and the reasons for this are simple: the route is not an skyhook line straight through a smooth face, but instead follows a logical line up a series of natural features.

During their ascent the women were put to the test by rain, snow and a broken stove which rendered the climb anything but easy. Marina Popova commented: ‘We acquired fantastic big wall climbing experience and had plenty of excitement! None of us had ever climbed anything like this before. As for the rockfalls, the route was not dangerous as it may seem as the rocks fell slightly to the right from the route, in particular when the sun came out. The route itself is quite safe. In the evenings we hung our portaledge beneath some overhangs. The main characteristic of the route was the great number of slanting pitches, but we were ready for that. And in spite of the challenging relief, there was no need for skyhooks and bolting."

While the women were climbing the Gunko route, their friends Denis Prokofiev, Vladimir Sysoev, and Roman Abildaev successfully repeated the 2007 Korobkov route up Peak Alexander Block's North Face. Snow showers and cold slowed the ascent, and while they needed 4 days to complete the route, an entire day was spent enduring heavy snowfall a mere 5 pitches from the ridge.

For further information check out: www.risk.ru