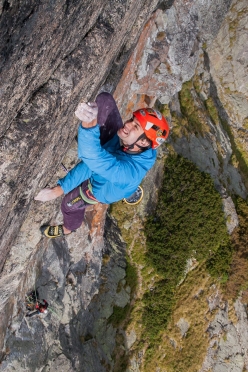 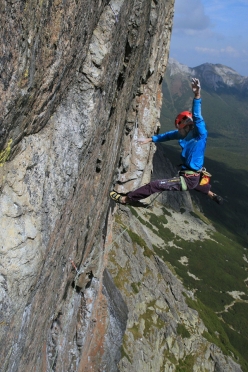 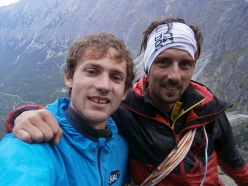 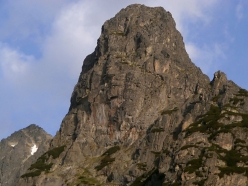 At the start of September 2016 Slovakian climber Jozef Kristoffy made the first free ascent of Corona 11- on Jastrabia veza, the hardest multi-pitch rock climb in the High Tatras.

After returning from a successful expedition to Cochamo (Northern Patagonia, Chile), where Jozef Kristoffy and his team made the first ascent of the 700m high El Condor Pasa, Kristoffy decided he would finally return to Jastrabia veza, a 2139m high south-facing peak in the Slovakian part of the High Tatras, close to Poprad.

On 17 - 18 June Jozef Kristoffy and his partner Miso Bado made the first ascent of what was to become Corona, the most difficult rock climb in this massif. This shares the start two existing routes, Pochyleho Platna and Jet Stream, but instead of breaking out left and right it continues straight up. Climbing ground-up, Kristoffy used a mix of micro-friends and micro-nuts, skyhooks and even a few copperheads to reach the top of the crux pitch, which he initially graded 8, A3+ aid. He then returned during summer  with the aim of climbing it free and, after working the moves and adding four bolts, on 2 September he climbed the route pinkpoint, i.e. with the gear already insitu.The climbing goes free at 11- (8c) and is protected by 4 bolts and few nuts and cams.

Kristoffy reported after his ascent "The climb is found in the mountains so I decided to respect the local ethics and protect it as such. The route is physically and psychologically demanding, those wishing to attempt the second ascent need to be good at placing gear and capable of making hard moves well above their protection."