Mt. Aksu seen from the approach.
Photo by archive Nefedov 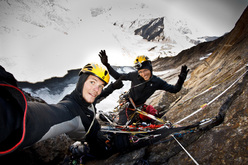 The two brothers from Saint-Petersburg, Russia ascended the circa 1500m high North Face of Aksu over 12 days via a line which connects two existing lines, the first route to the summit - Leonid Troshchinenko's 1982 line - and Aleksander Klenov's 1996 creation. The new variant has been called "Transerfing" and encounters difficulties up to 7b+, while much of the climbing is in the 6c to 7a+ region.

27-year-old Sergey stated "AKSU is the most spectacular peak in that valley. It offers beautiful crags and face-climbing, sunshine and sunrise on the big wall... That was very powerful experience for us: the next day after the summit we had to keep going down even though there were a terrible snowstorm. But without any doubt it add some pep to our adventure."

Aksu is just a day's trek from the more famous Karavshin yet despite this proximity the Aksu valley is rarely visited by foreigners. For more information, check out our article Pamir Alay, a granite paradise


The expedition was made possible with support from Grivel, Scarpa and Sivera.