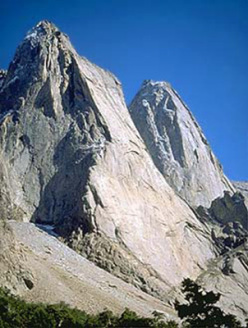 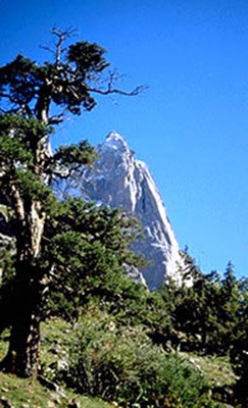 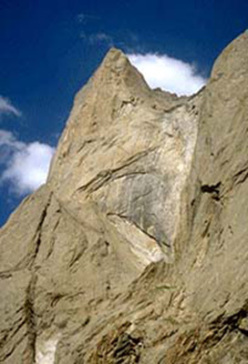 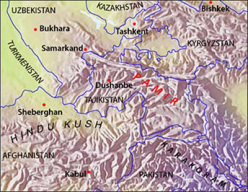 The Pamir Alay is an immense region wedged between the republics of Kirghistan and Tajikistan , dominated by the giant Pic Communism (7495m) and Pic Lenin (7134m), once the highest mountains in the now defunct Soviet Union. By Marco Borghetti, Roberto Invernizzi and Stefano Righetti.

Central Asia and its forbidden mountains
Central Asia - a place which immediately evokes the legendary Silk Road, the long journey undertaken by Marco Polo to the court of the Great Khan, and the religious-tribal fanaticism which, entwining around the secret aims of the greater and smaller powers, ensure that this "centre of the earth" is far too often the scene of terrible crises.

Vast deserts, towering mountains and unending steppes play host to what was once a great and important people, now nomads. Here there are high plateaus and soaring peaks where, as in the words of Marco Polo, "no birds fly, so high and cold is it here". In recent times they have suffered at the hand of political "experiments", but this area is now free of Soviet domination.
This part of Central Asia, once not easily accessible or simply out of bounds, is not without reason described as being the "roof of the world", for it is from here that the highest mountains on earth branch away - the Karakorum and the Himalayas southwards, the Hindu Kush westwards, and the Tian-Shan off to the north east.

The Pamir is an immense region, dominated by the giant Pic Communism (7495m) and Pic Lenin (7134m), once the highest mountains in the now defunct Soviet Union. Central Asia entices those travellers in search of new horizons, tired of seeing the "déjà vu", as the sheer number of unexplored valleys, untouched glaciers and huge, unclimbed rock faces is breathtaking.....

The Pamir Alay and the Asan-Usan region
The Pamir Alay, wedged between the republics of Kyrgyzstan and Tajikistan, contains a mountain chain that extends for over 800 km from the Pamirs to Tian-Shan. Here there are more than thirty-five 5000m peaks, the highest of which, at 5621m, is Mount Skalistiy.

This region is in some parts still completely unexplored (many valleys have no roads and the few that exist are often in a precarious condition). Up to just a few years ago it was mapped out only because of Soviet helicopter reconnaissance which was interested in discovering its geological make-up.
The mountains here are not only situated in a wild and fascinating natural habitat, but they also contain many precious metals and minerals; gold and silver can be found in Tajikistan, petroleum in Uzbekistan and uranium in Kirghistan. Conflicting interests arising from these probably sparked off many of the crises that have occurred here.

In recent years though the situation has changed considerably, for the Pamir Alay has received increasing attention by fascinated alpinists, attracted by its numerous unclimbed peaks. They have focused their efforts on the Asan-Usan region, thanks to its extraordinary granite monoliths. Asan-Usan, in the shepherd dialect Kirgisi, means "twins". This name derides from the incredible granite towers which face each other in the Ak-Su valley, close to Pic Pyramidali (5540m).

Brief history and the current situation
From a climber's point of view, Pamir Alay first began to make a name for itself only during the mid-eighties, when the Soviets, having realised its potential, decided to stage their alpine climbing competitions there. The peculiar rules (the higher the mountain or rock face, the more points it was worth) ensured that the climbers hurled themselves at the base of enormous smooth granite blocks which, in some cases, were ascended using a substantial amount of artificial aid.

The Soviet climbers remained interested only in those peaks or rock faces worthy of "points" and so, when in 1991 a French expedition entered the Ak-Su valley, it discovered an incredible amount of unclimbed rock. Various expeditions came to make their mark in the years that followed and now there are numerous routes which find their way up these immense granite walls.
It is certain that even today unscaled walls and unclimbed peaks can easily be found in this panoramic landscape. In many cases, the start of the routes are relatively accessible from the valley floor, where the base camps are usually established.

The problems connected with reaching the base of the route and transporting all the climbing gear never reach "Himalayan" proportions, and long walk-ins on glaciers are also rare.

Original, logical lines of ascent can be created without needing to resort to haul bags, intricate pulley systems and portaledges. But there are also smooth unclimbed rock faces over 1000 meters high, long overhanging corners and never ending Yosemite-like cracks just waiting to be ascended....

A guide to this region doesn't exist at present. Up to date information, route descriptions and sketches can be obtained by contacting the Club of Mountaineers and Rock climbers of Uzbekistan, Uzbek Republic, 700060 Tashkent, Proletarskaj St. 33, tel. 3712672397, fax 564797, e-mail MYRAT@VPU.TASHKENT.SU. The people to contact are Anatoly Shabanov and Oleg Gregoriev.

Getting there - The climate and the people
The best place to depart from for Pamir Alay is Tashkent, the capital of Uzbekistan. Lufthansa (from Frankfurt) and Turkish Airlines (via Istanbul) offer direct flights from Europe. Prices vary from 1.4 to 2 million lire. If you trust the airline companies of the post Soviet era, then flights via Moscow can be cheaper: the cheapest flight from Moscow to Tashkent costs around US$ 350.

A visa is necessary for both Tajikistan and Kirghistan. This can be obtained via an accredited travel agent; we recommend you use an agent for the approach to the base camp and organisation of it. The Club Alpinistico Uzbeko is a useful starting point, and the Moscow agent Anatoli Jannochkin must receive a mention as he helped us enormously. Anatoli is an ex-weatherman who, having abandoned his research, now dedicates his time organising expeditions to the neighbouring territories. He is well-educated, speaks good English, and has a good rapport with the local people. His address is as follows: Bibliotechnaya 27-30, Himki-6, Moscow, 141400, Russia, tel. (007) 095-5702414, fax (007) 095-2856808.

Visas may take a fairly long time to come through - apply for one some months prior to departure. The Russian Consulates deal with any diplomatic queries about Kirghistan. Unfortunately, in various countries in Central Asia and above all in Uzbekistan, severe restrictions are currently being imposed on entry visas. The "private" tourist or the "independent" alpinist may therefore encounter serious difficulties.

Our expedition - One star for Ulughbek
After having pitched our tents in the Ak-Su valley (valley of clear waters) at the beginning of August 1996 at the base of the imposing Pie Slesov (4240m), we quickly identified a magnificent unclimbed spur. Our base-camp, situated in a luscious field close to shady juniper bushes and yak herds, was just a few 100m from the start of the route.

"Una stella per Ulughbek" as it was eventually named, is 27 pitches long (1000m), graded VI+ and ascends up magnificent and often vertical granite cracks. One third of the route was prepared prior to the actual climb and the night spent in a freezing bivouac on the summit, gazing at the thousands of stars above.

Ulughbek, King of Samarkand and nephew of Timur, studied astronomy in great depth but neglected the political sphere. He attempted to govern according to the principles of reason and tolerance instead of basing his decrees on science and instruction. Whilst still young he was deposed by a conservative faction and decapitated. Situations like this continue to exist, not only in remote regions such as the Asan-Usan.
Thanks to an extended period of excellent weather we succeeded in putting up two other new routes in the Ak-Su valley, namely "Trenta passi nella meta del cielo", 700m, Vlll- rising up magnificent slabs and cracks, and "Est per Giacomo", 350 m, V which climbs up the crest of a typical pyramidal spire.

The rest of our time was spent reading, going on panoramic walks and sharing moments with the Kirghisi shepherds and their children. Finally, we visited Samarkand, still profoundly evocative of the journeys to the treasures of the Orient, with its mosques and navy blue sun-baked majohca domes. It was the perfect ending to our trip.